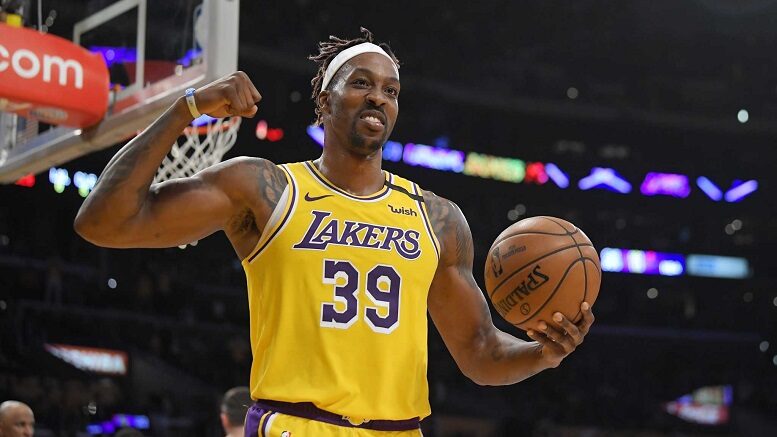 Lakers center Dwight Howard celebrates a basket during a game vs. the Cavaliers.

The Lakers underwhelmed last season, losing in the first round to the eventual Western Conference champions. However, they reloaded this offseason by adding Russell Westbrook, Carmelo Anthony, Rajon Rondo, and Dwight Howard to the mix.

As long as LeBron James is playing close to the prime peak of his powers and if Anthony Davis on the roster, Los Angeles is always going to have great odds to not only win their division but also to win the championship.

Checking in on Russell Westbrook

Westbrook should have a lot to prove back home in Los Angeles, as he and James will likely try to find the same dynamic James and Dwyane Wade had with the Heat, as our own Sameer Kumar recently wrote.

Westbrook proved last season with the Wizards he still had plenty left in the tank, as he averaged a triple-double for the fourth time in his career.

Dwight Howard’s Back in Los Angeles

Howard strong familiarity with the Lakers, as both played integral roles in their most recent championship. The center came off the bench in Friday night’s preseason loss to the Warriors, though he had a stat-filled night, scoring 23 points on 8-of-11 shooting. He added 12 rebounds along with a block and a steal.

Sign up today at PointsBet and receive up to $2,000 in risk-free bets on tonight’s game, meaning if you wager and it loses, the amount will be refunded to your account!

Get a $500 risk-free bet plus an additional risk-free PointsBetting wager worth up to $1,500.

Use Promo code MVPBET or use this link to download the app on your iPhone today!