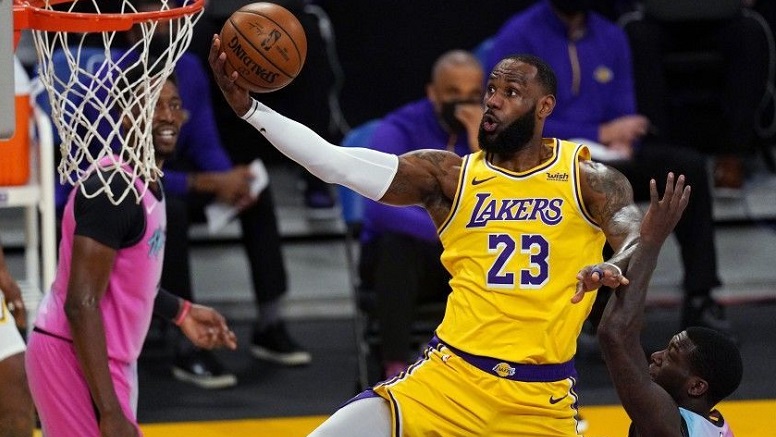 Lakers forward LeBron James drives to the basket vs. the Heat. - AP

The Suns won the Pacific Division last year, as they wound up making the NBA Finals. Prior to last season, however, the Lakers not only won the division, but the championship as well.

The Lakers underwhelmed last season, but reloaded this offseason by adding Russell Westbrook, Carmelo Anthony, Rajon Rondo and Dwight Howard to the mix.

Sign up today at PointsBet and receive up to $2,000 in risk-free bets on tonight’s game, meaning if you wager and it loses, the amount will be refunded to your account!

Get a $500 risk-free bet plus an additional risk-free PointsBetting wager worth up to $1,500.

Use Promo code MVPBET or use this link to download the app on your iPhone today!

As long as you have LeBron James playing close to his prime peak of powers as well as Anthony Davis on your roster, you’re always going to have great odds to not only win your division, but win the championship.

Westbrook should have a lot to prove back home in Los Angeles, as he and James will likely try to find the same dynamic James and Dwyane Wade had with the Heat.

Westbrook proved last season with the Wizards he still had plenty left in the tank, as he averaged a triple-double for the fourth time in his career.

Rondo and Howard have strong familiarity with the Lakers, as both played integral roles in their most recent championship. Anthony has proven that he can be an effective scorer on a winning team in a limited capacity as well.

Devin Booker should continue his rise as one of the best young players in the league, as the gifted scorer has great command of the mid-range.

Chris Paul should be hungry and motivated to get his team back to the Finals, as he successfully defied Father Time last season and proved capable of finding his own spots to score while continuosuly playmaking for others.

Deandre Ayton could also be motivated to have his best season yet, as he’ll be entering a contract year assuming he and the Suns can’t agree to an extension.

Mikal Bridges, Cameron Johnson and Jae Crowder proved to be very effective players out on the wings for Phoenix last season.

Assuming all of the pieces mesh as well as they did last season, if not better, then the Suns will be a serious threat to win the division and perhaps find themselves back in the Finals.

Stephen Curry played like his MVP self last season, as he was able to lead the Warriors to the play-in game without Klay Thompson.

Thompson should be returning at some point this season after missing the last two due to a torn ACL and Achilles injury in back-to-back years.

Draymond Green should continue to be a pest defensively and provide excellent playmaking as a forward while being their emotional leader out on the floor.

Andrew Wiggins and Otto Porter Jr. should provide excellent shooting and scoring out on the wings.

Jordan Poole could be a breakout candidate, as he put up 30 points, five rebounds and five assists in his first preseason game.

James Wiseman could provide the rim protection the Warriors need, but he needs to stay healthy and consistent.

If the Warriors can successfully put all of the pieces together, then they can definitely make the playoffs.

Kawhi Leonard will be out for a good portion of the season, as he’s currently recovering from a partially torn ACL. That will definitely hurt the Clippers’ chances to win the division title this season.

However, Paul George proved he can carry the team without Leonard, as he averaged of 29.0 points, 9.5 rebounds and 4.8 assists per game to lead them past the Jazz in six games in the second round of the playoffs last season.

They brought Eric Bledsoe in to be their starting point guard while retaining Reggie Jackson as their backup, and still have reliable vets in Marcus Morris, Serge Ibaka and Ivica Zubac to round out this team.

Winning the division would likely be tough for them this season, but if they can get Leonard back in time for the playoffs, then we could see the Clippers end up making the Finals.

The world has a better chance of ending than the Kings do at winning this division. The best the Kings could maybe do is contend for a play-in spot, but that’s about it.

Davion Mitchell will likely be brought in slowly, but could see significant playing time down the stretch of the season, especially if Buddy Hield ends up getting traded.

Harrison Barnes is another guy that could end up being shipped to a contender at the trade deadline.

Be the first to comment on "Pacific Division Odds: Will Lakers Bounce Back?"