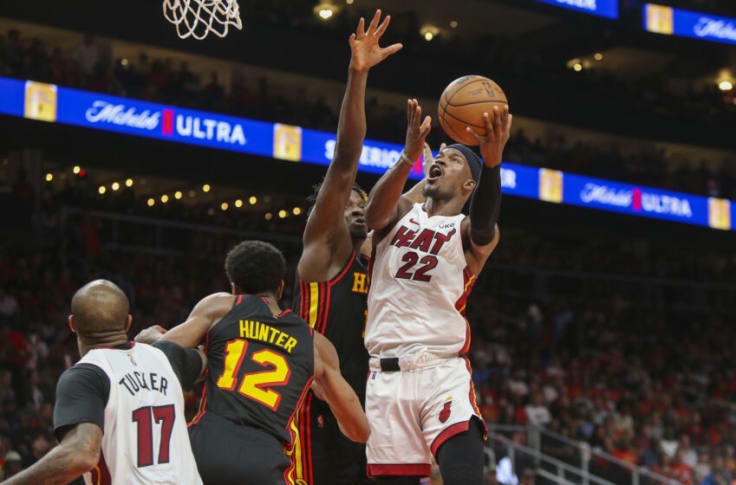 The Miami Heat earned a big 110-86 win over the Atlanta Hawks in Atlanta. After dropping a heart-breaker in game three the Heat came into game four focused and executed their game plan. The Heat’s defense was smothering and they were able to hold Hawks’ Superstar Trae Young in check. The Heat held Trae Young to just nine points on the night. Young spoke postgame regarding what the Heat were able to do to slow him down.

That'll do it ☑️ pic.twitter.com/NocNGkba33

“They’re doing a great job of showing help and not letting me get to the paint,” Young said. “You’ve got to give them credit. We’ve got to do a better job of figuring out how to get open looks so I can create for my teammates and myself, too.”

Just taking what the defense gives us pic.twitter.com/Y7ftFhiBjs

Jimmy Butler led the Heat and once again had a big night. Butler scored 36 points in 36 minutes of play overall. Butler shot 12-for-21 from the field. He knocked down 1-for-2 from behind the three-point stripe. Butler also grabbed 10 rebounds and dished out four assists to lead the Heat to a blow-out game four victory. Butler knew he would have to step up even more with Heat Starting Point Guard Kyle Lowry out due to injury. Butler stated postgame that his teammates did not hesitate to let him know.

Taking this W to the crib. #WINNING pic.twitter.com/ETOmBetGQc

“Everybody is in my ear about staying aggressive, taking more shots,” Butler said. “Tonight was a good one. We’ve got another one we’ve got to get.”

Jimmy G Buckets, tell us what the G stands for ⬇️ pic.twitter.com/QRHPyqfXab

Atlanta got welcomed to The Home Dipo last night 👀

Bam slams, putbacks and an impact that goes beyond the stat sheet 💥 pic.twitter.com/sBfnNN47XI

Get 50% off your @DoorDash order up to $10 using promo code WHITEHOT in the Miami area (through 5/1, terms apply) – https://t.co/wu7lvpbHnw pic.twitter.com/pz6MvWR5WS