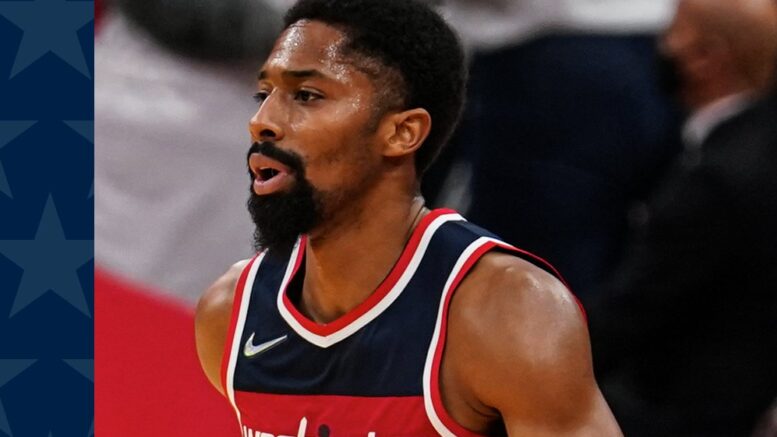 Washington Wizards guard Spencer Dinwiddie - photo via the team (presented by Capital One).

The Wizards lost their preseason opener to the Rockets 125-119 but the game was never about the final score for Washington; it was about getting the team’s new pieces acclimated.

Here are some quick notes from the contest as well as the postgame press conference:

1 – Aaron Holiday looks like he’ll be among the team leaders in usage rate. He got some run with Bradley Beal, but without the All-Star in the game, he took on much of the play-making duties. Holiday had 15 points (second only to Beal) on nine shots in his 17 minutes of action. He added three assists and two turnovers.

2 – Spencer Dinwiddie looks spry again. The former Net scored 14 points on 10 shots and dishing out five assists. “He looked terrific,” Wizards head coach Wes Unseld Jr. told FortyEightMinutes and other media after the contest via zoom. “He’s back to normal.”

Things you love to see:

3 – Kyle Kuzma looked…hesitant. The former Lakers didn’t really get in rhythm for most of the night, making just three of his 10 shots. That could simply be a product of getting accustomed to his new teammates. Coach Unseld said that chemistry for the team is a “work-in-progress.”

4 – Rookie Report: Corey Kispert got the start at the three for the Wizards on Tuesday night with Kentavious Caldwell-Pope (dental procedure) out and he played the most out of any of the starters (25 minutes). The No. 15 overall pick went 5-for-9 from the field for 12 points (+4).

"It was good…he's kind of been playing those starters minutes in practice, so it didn't feel uncomfortable."@FortyEightMins | 🏀 | @WashWizards pic.twitter.com/J8krinXQnI

Be the first to comment on "Wizards: 4 Quick Takeaways From Preseason Game vs. Rockets"