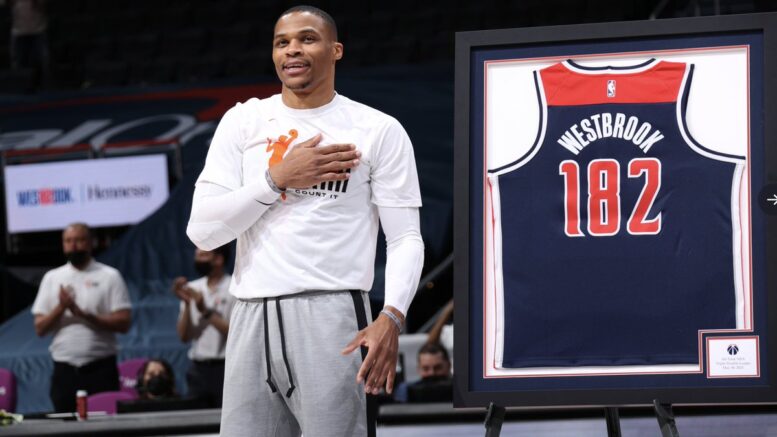 Russell Westbrook was traded to the Lakers prior to the NBA Draft, though he told GM Tommy Sheppard that he wanted to remain in Washington if Los Angeles wasn’t going to be the destination.

“That was a very, very unusual circumstance where the day before the draft we were kind of spitballing some ideas and getting some input,” Sheppard tells FortyEightMinutes and other media in Washington.

“I had a heart-to-heart with Russell and it was important to him that I knew and the Wizards knew he wants to play here.”

Sheppard added that Westbrook’s contributions during his lone season with the Wizards played a role in the front office assisting the former MVP in getting to his top choice of teams.

“If there was ever an opportunity with the Lakers, that would be the one place. I look at his Hall of Fame career and all he did for us, certainly, for me, I will try to help a guy as long as it helps the Wizards. In this case, we could do a deal and it did help the Wizards.”

Washington received Kyle Kuzma, Kentavious Caldwell-Pope, Montrezl Harrell, and a first-round pick (No. 22 overall, which was eventually flipped for Aaron Holiday and Isaiah Todd) in return for Westbrook.

“If that deal didn’t go through, Russ would still be playing for us and we would all be happy. That opportunity presented itself and it was a great deal for both sides and it made a lot of sense for both of us. I wish him the very best,” Sheppard said.

Be the first to comment on "Wizards Notes: Westbrook, Trades, Sheppard, Walker, Hard-Cap"