There were recent rumblings that new Pelican CJ McCollum hasn’t yet had a chance to speak with Zion Williamson and J.J. Redick, who played alongside Williamson for two seasons, shed some light on the situation in New Orleans.

“This is a little bit insane to me. There’s a general decorum of behavior that you should apply as a teammate, Redick explained on First Take.

“This is a pattern of behavior with Zion that we are seeing again and again. And look, I was his teammate. I can describe him as a detached teammate. That is an accurate statement,” Redick continued. “This is basic level of humanity, being a teammate. Send a text to a guy when he gets traded to your team. That is just normal behavior. That’s the bare minimum that you have to do.

It’s unclear what exactly Williamson’s issues are with the Pelicans, though there have been rumors about him wanting out ever since he was drafted with the No. 1 overall pick back in 2019.

Rival executives around the league are eyeing the Pelicans’ situation and preparing the day that Williamson demands a trade from the franchise. That may not come this offseason or even before next year’s deadline, but it appears evident that it will happen at some point.

Williamson could return to the team at some point this season despite his level of long-term commitment to the franchise and surely, the front office would love that given the moves they made at the trade deadline with the short-term of making the playoffs in mind.

New Orleans has gone 1-4 since McCollum arrived but the team sits just two games back of the Blazers for the 10th seed in the conference (which is the final play-in tournament spot).

Bet on the Pelicans Risk-Free at PointsBet 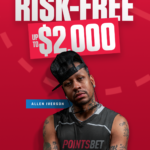