Joel Embiid Taking Steps Toward Playing For France in 2024 Olympics

Coach Wes Unseld Jr. gave the media some insight as to when Kristaps Porzingis will make his debut.

Mavericks forward Kristaps Porzingis looks to pass during a game against the Celtics. - USA Today

Kristaps Porzingis hasn’t yet made his debut since the Wizards traded for him, though there’s a good chance he’ll suit up immediately after the All-Star break.

Coach Wes Unseld Jr. indicated that the February 25 Spurs-Wizards could be the date for Porzingis to make his debut when speaking with FortyEightMinutes and other reporters via zoom on Thursday.

“I anticipate he will,” Unseld said of Porzingis without making a full commitment that the big man will play on that date.

Washington gave up Spencer Dinwiddie and Davis Bertans in their trade with the Mavericks for Porzingis. The franchise also netted a future second-round pick as part of the deal.

Betting on the NBA? 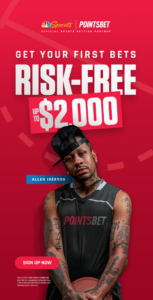 The Wizards are among the teams pursuing a trade for Donovan Mitchell, according to a report from The Athletic. It's unclear...

Bradley Beal's new contract (five years, $251 million) has received some media backlash given it's the richest contract in Wizards'...

The Wizards are signing Delon Wright to a two-year deal worth $16 million and as The Athletic's David Aldridge reports,...

Victor Oladipo is unlikely to return to the Heat and several rival teams have interest in the shooting guard. The...

The Raptors are on the lookout for a center as free agency begins and while multiple outlets have linked Rudy...