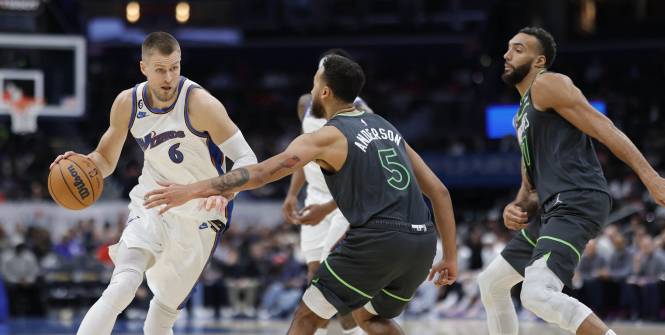 The Washington Wizards earned their eleventh victory of the season. The Wizards defeated the Minnesota Timberwolves 142-127. Kristaps led the way for the Wizards with a career night. Wizards Forward Kyle Kuzma who scored 23 points himself, spoke on Porzingis’ career night postgame following the Wizards’ win.

“It’s always fun when you can get somebody a career night,” Kuzma said. “It’s very, very hard to play in this league. It’s tough to do anything in this league, and any time players can have career highs it means a lot to them, and as a player, you understand how much it means.”

Kristaps Porzingis scored a career-high 41 points on 12-for-18 shooting from the field. Porzingis knocked down 6-for-10 from behind the three-point line. He was perfect from the free-throw line going 11-for-11. Porzingis also grabbed four rebounds and dished out three assists.

The Wizards will travel to Brooklyn, New York to face the Brooklyn Nets on Wednesday, 11/30. Tip-off from the Barclay’s Center is at 7:30 pm.