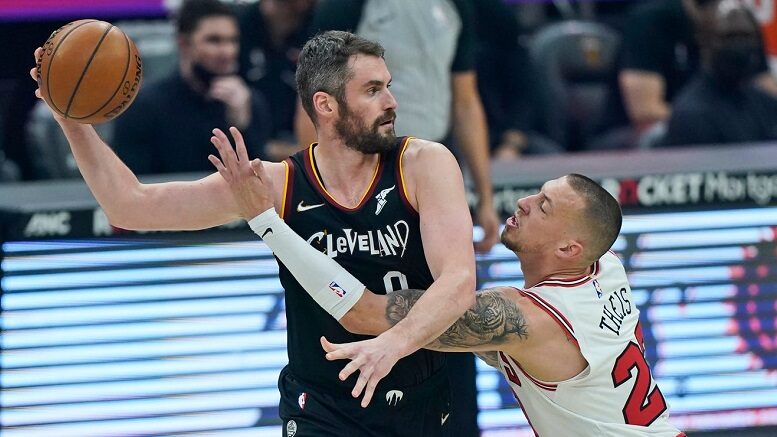 Cavaliers power forward Kevin Love has experienced his struggles this season, including a well-documented meltdown  towards the officiating earlier this week — an incident that proved costly to his own team.

But Love still has faith that he can help the Cavs, or a contender, push them to another level.

“When I am available and playing at a high level, I feel like I could be that guy that pushes the team really over the edge, puts them into contention,” Love told Chris Haynes of Yahoo Sports. “A guy that has playoff experience, has played with some of the greatest players if not the greatest player of all time in LeBron James.”

Love did indeed team with James with four straight trips to the Finals, including a championship in 2016. (He was injured and did not play in the ’15 Finals appearance.) The first three of those trips also came with Kyrie Irving on the team.

But today, Love joins Matthew Dellavedova as the lone remaining member from the title team. He missed the first 40 games, and has been putting up career lows in points (11.4) and rebounds (6.6) since his return.

Love, 32, still has two years and around $60 million left on his contract after this season. “It’s an albatross that no one wants,” one opposing general manager told FortyEightMinutes this week.

Still, the Cavs are expected to try to trade Love this offseason, as he’s become little more than expensive and bad fit with the Cavs’ current group of younger guns. He also seems to be frustrated with a perceived acceptance of losing and playing for another lottery pick.

On the bright side, Love seems to think if you’re a contender and want a veteran big man who knows how to win, and can make a deal for him … well, he still has enough left to make a difference. If not, he implied maybe he can be the man to get the Cavs into contention, if for nothing other than at least a playoff spot.

You can view the entire Love/Haynes conversation in the video below.