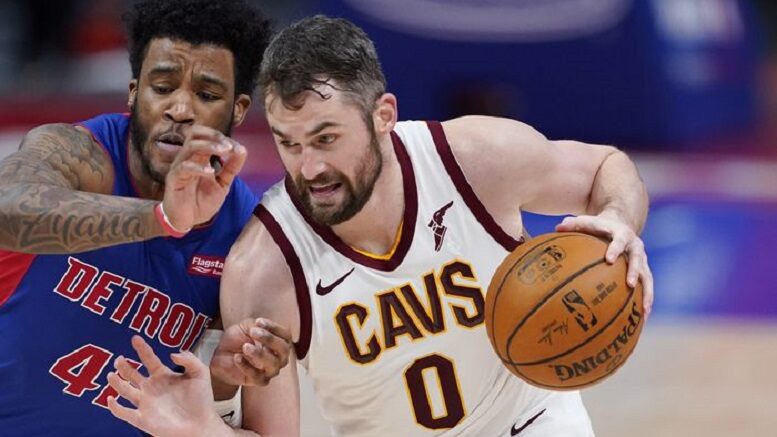 It was of Love angrily slapping the ball inbounds, right into the hands of the Toronto Raptors, and Love casually walking away as he said something to the official. The Raptors hit a 3-pointer, and the Cavs lost. It looked as if Love had given up on the play.

At the time, no one knew why Love was upset. It was a bad look all the way around, a lousy example for his young teammates. Love says he understands all that.

“That wasn’t me,” Love said. “I f—– up, everybody knows that. I love this team. I apologize for that. I don’t go out there meaning to upset anybody, to embarrass myself, to embarrass the organization. I feel like I’m a part of something bigger than myself here.”

Love, 32, is having his worst season as pro, averaging career lows in both points (11.7) and rebounds (6.4). Former teammate Channing Frye said Love is fed up with all the losing, as the Cavs are headed back to the draft lottery for a third straight season.

So the frustration may be mounting. And all of it came to a head.

“My intent wasn’t to disrespect the game. My intent wasn’t even for the damn ball to go inbounds,” Love said. “It was a moment that I got caught up in. I didn’t even really understand what happened as the possession played out. I think I was a little dumbfounded.

“I even heard a couple of coaches saying the ball wasn’t in. My idea was that I was going to go grab the ball and pass it right back into D.G. (Darius Garland). But that obviously wasn’t the case.”

What the Cavs do from here remains to be seen. After talking with Love, it appears the result will be just a talking-to. Bickerstaff has said the Cavs intended to turn the page after Love apologized to his teammates.

But this isn’t the first bit of drama surrounding Love during his Cavs tenure. In 2019-20, he was the main voice behind a what seemed to be revolt of former coach John Beilein. Love also had a run-in with general manager Koby Altman.

The Cavs consider those incidents ancient history, and seemingly are willing to do the same with this one, with Bickerstaff saying a “lapse in judgement” was behind the most-recent incident.

“This one hurt me because it wasn’t coming from a bad place. It was one that was not ill-intentioned,” Love said. “While it shouldn’t happen, this was in some ways a little bit blown out of proportion. … I’ll ride or die for J.B. and our coaching staff, and I’ll ride or die for our young guys.”

Be the first to comment on "Kevin Love on meltdown: No intent to disrespect game, Cavs"