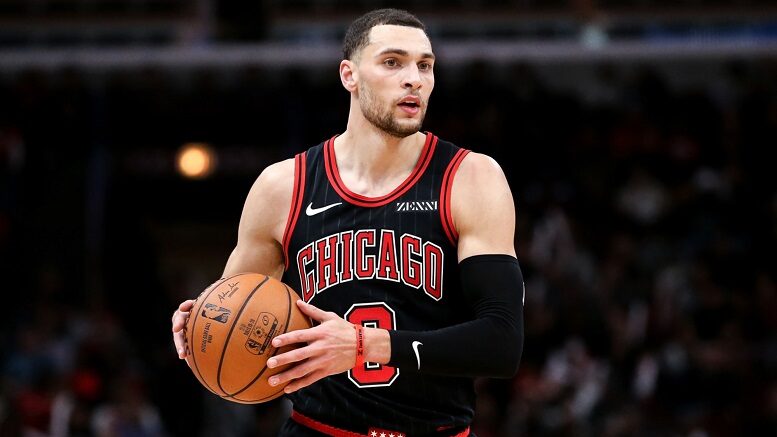 Bulls guard Zach LaVine looks to pass against the Pistons.

The best betting lines for wins for the Bulls this upcoming season are over 41.5, per PointsBet and under 43.5, per Caesars (h/t Action Network).

Given Chicago’s acquisitions of DeMar DeRozan and Lonzo Ball in addition to Zach LaVine and Nikola Vucevic, the Bulls have the making to be a playoff team in the Eastern Conference.

Vucevic brings excellent mid-range and 3-point shooting and post play to give the Bulls a reliable scoring option, as it will also help open up the floor for his teammates to get some good looks within the flow of the offense.

DeRozan brings a reliable threat to score in the mid-range and on drives to the rim. The pick-and-roll possibilities with DeRozan and Vucevic are endless.

Both scorers will take a ton of pressure off of LaVine this upcoming season, as having both players in the fold could maximize catch and shoot opportunities for LaVine, who converted 48.6 percent of those attempts last season.

During his stint with the Pelicans, Ball’s 3-point shooting improved significantly, and in the preseason, he showed no signs of slowing down,  as he made 5-of-6 of his attempts from downtown in a recent preseason game that just so happened to take place against the Pelicans.

Defense could be an issue with this group, but Alex Caruso and Tony Bradley should come in and help address that area of weakness.

Having said all of this, I’m inclined to take the over. All of these players are too talented to not win at least 45 games as a collective group.

Be the first to comment on "Bulls Rumors: Over/Under, Ball, Vucevic, Williams, White"