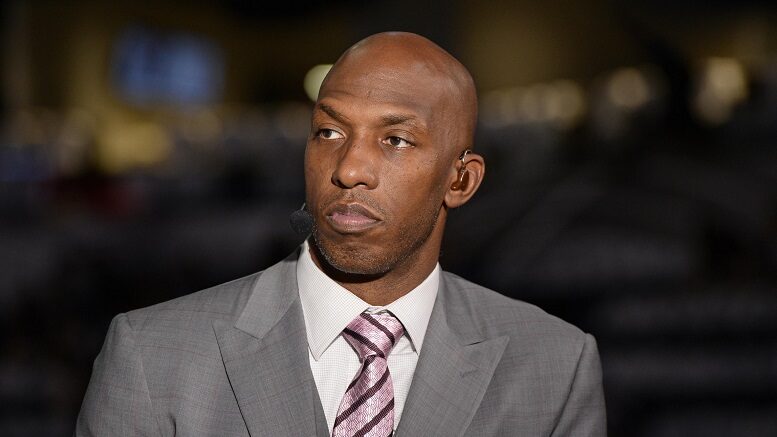 Former NBA guard Chauncey Billups gets ready to answer a question on the ESPN set.

Despite reportedly having an open invitation to join the Los Angeles Clippers, it doesn’t appear that Chauncey Billups is out of the running for the Indiana Pacers’ head coaching vacancy, according to J. Michael of the Indianapolis Star.

Instead, Billups and former Houston Rockets coach Mike D’Antoni could very well be two of the three finalists for the Pacers, Michael noted.

An earlier report from The Athletic indicated that Billups will be the lead assistant for Tyronn Lue, who agreed to a five-year deal to coach the Clippers on Thursday. But should Billups and the Pacers reach a deal, it would only make sense for Billups to chose his first head-coaching gig over an assistant role.

A report from The Ringer earlier this week indicated that Finch is the frontrunner, though it remains unclear if that is actually the case.

As has been previously reported, the Pacers are closing in on a final three after an exhaustive search. Chauncey Billups is still a candidate despite having taken the Clippers assistant job. Also heard New Orleans assistant Chris Finch made a very good impression. Stay tuned

Billups has been eyeing a position as a head coach since retiring as an NBA point guard, per Chris Haynes of Yahoo Sports. In 17 NBA seasons, he spent time with six teams, including the Boston Celtics, Toronto Raptors and Denver Nuggets.

He retired with the Detroit Pistons 2014, winning a title with the franchise a decade before that.

Billups was reportedly offered a five-year contract to be the Cleveland Cavaliers’ head of basketball operations in 2017, but turned it down to remain in his position as an ESPN analyst.

Meanwhile, it was reported last month that D’Antoni and the Pacers have a mutual interest.

“We’ve seen some of the hirings over the last few years, and they’re coming from all over the board,” Pacers president Pritchard said recently. “The way I’ve set up this process is, we want to start with a big pool then get down smaller and smaller. I don’t want to rule that out. If there’s an existing coach who has experience, who knows how to build a program, but maybe has a little mark or has something he needs to improve on.

“… I believe this, that the head coach is critically important, but nowadays, that second, third and fourth coach almost are more important. So how they build out their structure and their coaching staff is critical.”

Be the first to comment on "Billups, D’Antoni believed to still be in running for Pacers job"