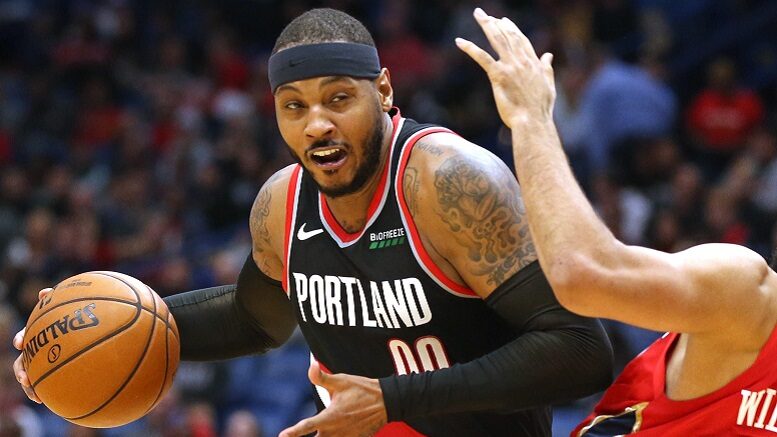 Trail Blazers forward Carmelo Anthony drives to the basket vs. the Pelicans.

Carmelo Anthony wanted to return to the Trail Blazers before signing with the Lakers, Chris Haynes of Yahoo Sports writes.

Anthony has spent the last two years in Portland but said that management never contacted him about a return.

“No, not the way I thought. But honestly, I wasn’t expecting it,” Anthony said while appearing on Haynes’ “Posted Up” podcast. “… Not to say Portland did anything wrong, but I was sitting around because I’m a loyal person. I didn’t want to leave (Damian Lillard) and CJ (McCollum) and those guys. But I know the business.”

While the Trail Blazers didn’t express interest in keeping the 10-time All-Star, other teams did, including one of his former ones.

“New York was always there, always a story,” Anthony said. “I told my son when he made it to high school, I’d be there. Philly, I didn’t get a chance to converse with Philly, but there was interest. New Orleans had interest. It felt good to see that again and being a part of teams being interested in me when 18-20 months again, it was nobody.”

It will be interesting to see Melo finally teaming up with LeBron James, as LeBron himself reached out and told him it was time for them to team up.

Be the first to comment on "NBA Rumors: Anthony, Siakam, Beverley, Thomas, Warriors"