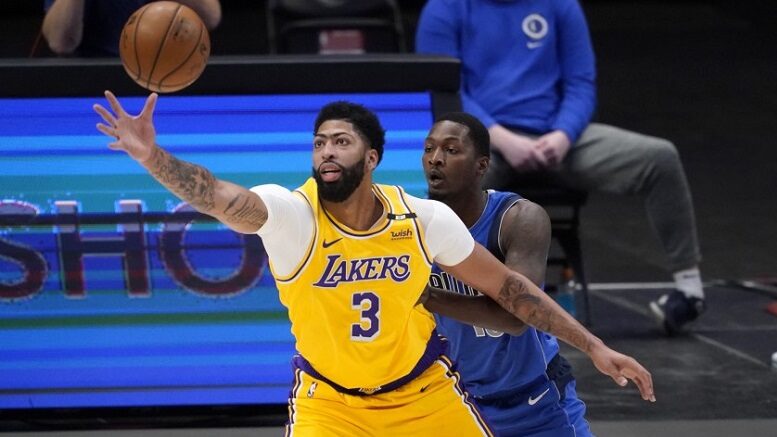 Before the Los Angles Lakers took on Phoenix Suns in game four, Anthony Davis was listed as questionable.

Anthony Davis is unlikely to play in Game 5 because of his strained groin, The Athletic reports. That runs contrary to what Davis said on Saturday.

There’s no chance that I don’t play tomorrow,” Davis said after practice Saturday. “As a player, I’ve wanted to be in this moment. You want to be in the playoffs and help contribute to my team’s success. I want to be out there. So in my eyes, for me as a competitor, I think I’ll be out there [Sunday].”

He did, in fact, suit up for the Lakers, but he had to exit the game early with a groin strain, according to Lakers reporter Mike Trudell and was replaced by Kyle Kuzma.

.@AntDavis23 could be out 2 weeks to two months, depending on the degree of the groin strain: “Depending on the location of the strain on the muscle & the degree, a 1st degree muscular strain timeline to return is 2-4 weeks. Longer, up to 6-8 weeks,” says @Nunez_MarcoA.#LakeShow #NBA pic.twitter.com/S11WUERPjM

According to Lakers’ former trainer Marco Nunez, last season’s Defensive Player of the Year runner-up could miss between two weeks to two months with the injury.

“Depending on the location of the strain on the muscle and the degree, a 1st degree, muscular strain timeline to return is 2-4 weeks,” said Nunez via text.

“Longer, up to 6-8 weeks if he is diagnosed with a 2nd or 3rd-degree strain. Similar to a hamstring strain, a groin strain can be crucial for an athlete involved in a sport like basketball.”

Anthony Davis finished the game with six points, four rebounds, and three assists as the Lakers fell to the Suns 100-92. Originally, posted on Landonbuford.com.

Be the first to comment on "Latest on Anthony Davis"