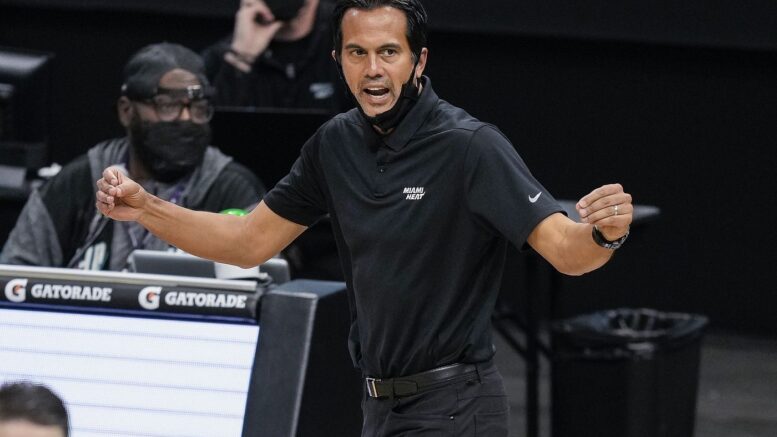 Spoelstra’s career path from a video coordinator with the Heat to coach of the team is an inspiring one. He credited Heat owner Micky Arison for giving him a shot. Once he got his shot he ran with it and here we are, 600 wins later.

When you hear it you know we #WINNING! pic.twitter.com/JrJBKvjbGp

“It is humbling,” Spoelstra said. “Obviously, I always think about Pat and Micky for having this incredible opportunity to be able to coach with this franchise. I feel a great responsibility to do it the right way for something they started and created.

The Heat defeated the Spurs 116-111 and now hold a 33-30 record. That is good for seventh in the East. They only sit two games behind the fourth-place New York Knicks.

In these final nine games, the Heat can make some headway if they play good basketball.

Jimmy Butler once again led the Heat to victory and has continued his #JIMVP campaign by dropping 29 points on 11 of 23 shooting from the field vs. the Spurs. He also grabbed eight rebounds and dished out six assists.

“I know if we win, that takes care of everything,” Butler said.

The Heat look to continue their winning ways in their next game at Cleveland on Saturday, 5/1. They tip off against the Cavaliers at 8 pm Eastern.

everything feels better the day after a W

Be the first to comment on "Heat’s Erik Spoelstra on 600th career win: ‘It is humbling’"