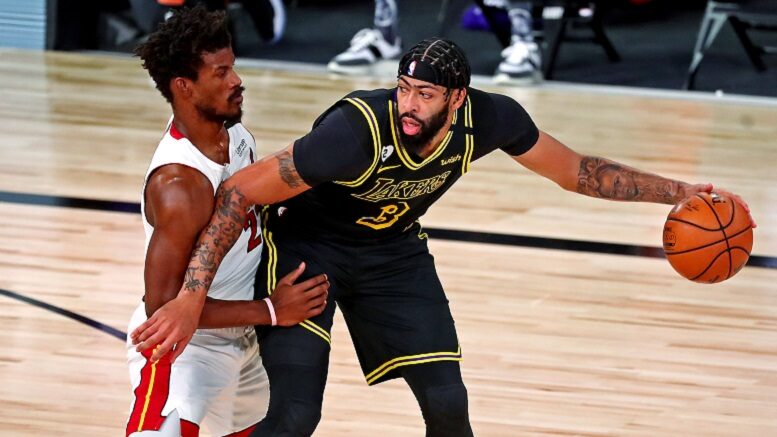 Lakers forward looks to make a move around the defense of the Heat's Jimmy Butler. Kim Klement-USA TODAY Sports

Anthony Davis took advantage of the Miami Heat not having all-NBA defensive team member Bam Adebayo, as Davis finished with 32 points and 14 rebounds and the Los Angeles Lakers defeated the Miami Heat by the score of 124-114. Davis scored 15 of his points in the third quarter as the Heat could not find an answer to stop him in the paint.

Davis finished 15-of-20 from the floor, hitting 14 of his first 16 shots. He had eight of the Lakers’ 16 offensive rebounds, allowing them to create plenty of second-chance points against a depleted Heat lineup. The Lakers outrebounded the Heat 16-6 on the offensive glass — also allowing the Lakers to get extra chances to from beyond the arc.

LeBron James added 33 points, nine rebounds and nine assists, with the Lakers knocking down 16 3-pointers. Their 47 3-point attempts were a franchise record and they fell three short of tying the franchise playoff record.

The Heat were without Adebayo (shoulder/neck) and Goran Dragic (foot) — and minus those two key starters, coach Erik Spoelstra had to shorten his rotation, using only seven players all game.

The Heat led for a grand total of 1 minute and 5 seconds, coming no closer than nine points in the second half, and even that was in the third quarter.