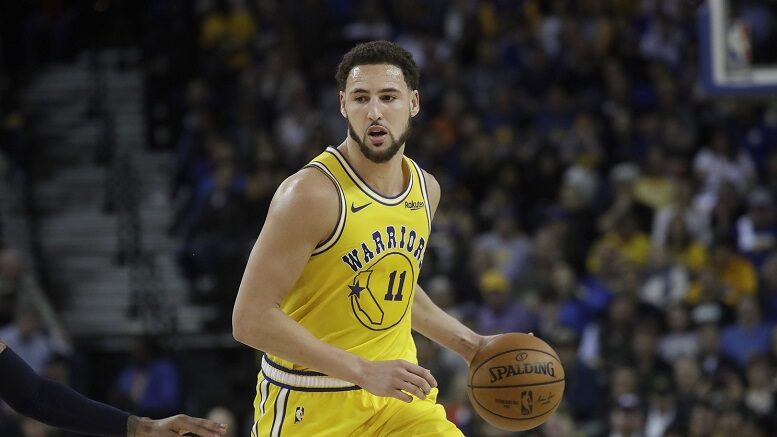 Warriors shooting guard Klay Thompson drives to the basket vs. the Mavericks.

The Warriors’ 2020-21 season was a letdown, but that isn’t stopping some of their players from re-upping. Kevon Looney has exercised his player option for next season, per ESPN’s Adrian Wojnarowski.

Looney, who has played in Golden State for his entire career, will make $5.1 million in year seven. The big man averaged 4.1 points, 5.3 rebounds and 2.0 assists in 61 games this season. The 6-foot-9 big man serves as valuable depth on a team that needs it moving forward.

Posting a 39-33 record this season, the Dubs were able to qualify for the Western Conference play-in tournament. Things ended on a sour note, though, despite Stephen Curry‘s All-NBA season. Curry and company will look to reload and improve next season.

After missing this season due to a torn Achilles tendon, Klay Thompson‘s recovery seems to be going well. The Mercury News’ Curtis Pashelka details how a timeline for Thompson’s return is still undecided, although GM Bob Myers is remaining optimistic.

“‘That’s what we’re going to have to figure out — when the right time for that is,’ Myers told NBC Sports Bay Area. ‘I think we’ve set on record, I don’t think it’ll be the first game of the season in October. Will it be Thanksgiving? Will it be Christmas? I think it’s more likely December. But I don’t know when. It’s hard to gauge. It depends on how he meets all of those hurdles in his rehab.'”

Thompson, who hasn’t play in regular-season action since 2019, has been getting in some on-court work recently. The five-time All-Star is facing a great deal of adversity but if he can return to form, the Warriors will be a tough out by the time next season’s playoffs roll around. The importance of getting Curry’s backcourt running mate back in the starting lineup cannot be understated.