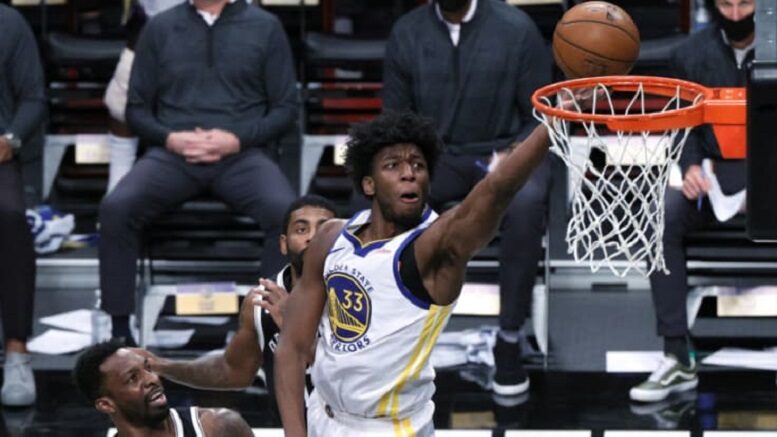 Warriors center James Wiseman drives to the basket vs. the Nets. - File photo

After a disappointing season, the Warriors could soon be shaking things up.

The latest rumors surrounding the team indicate that a James Wiseman trade is possible as the organization looks to get back into contention. Wiseman, who was selected second overall last year, had an underwhelming rookie campaign. In 39 games, the big man averaged 11.5 points and 5.8 rebounds per game.

This offseason is a major one for Golden State. With the return of Klay Thompson on the horizon, a playoffs-or-bust expectation has returned. GM Bob Myers is on record emphasizing how important it is to avoid developing young talent at the cost of wins. Wiseman is a prime example of that predicament.

With Wiseman and picks seven and 14 in this year’s NBA Draft at their disposal, the Dubs have options. In any trade for a star, though, Andrew Wiggins or Draymond Green would likely need to be included in order to match salaries. That’s the tricky part. How many picks should be included? Which prominent member of the roster needs to accompany Wiseman in a package? Will he even be traded? Let’s break down three potential trade packages Golden State may want to consider.

Siakam is the popular name currently being thrown around in Warriors trade rumors. The forward is coming off an inconsistent season that resulted in him getting shoulder surgery in June. The upgrade from Wiggins to Siakam is not extreme, but a gap certainly exists. Boucher was a top-10 finisher in Sixth Man of the Year voting and averaged 13.6 points and 6.7 rebounds per game last season.

In acquiring Siakam and Boucher, the Warriors would be receiving a pair of small-ball big men capable of contributing in different ways on offense while providing terrific defense. Despite giving up two of their best players, Toronto would have a chance to develop Wiseman and add a premier young talent in the draft while also adding Wiggins into the fold. This package isn’t perfect, but it’s better than a Wiggins-Wiseman-picks swap for just Siakam. Pick No. 14 may have to also be included, though.

There are a lot of moving parts here, but let’s start with Golden State’s return. Beal is one of the league’s best scorers. Assuming Thompson can be shifted to the small forward slot, a three-headed monster of he, Beal and Stephen Curry would almost be unfair. It would instantly vault the Warriors back into NBA championship talks. Adding Bryant, who’s coming off a torn ACL and entering the final year of his contract, would give them a big who can serve as a floor-spacer. His defensive shortcomings are legitimate, but he’d be a solid addition nonetheless.

The hard sell, in this scenario, is what goes to the Wizards. Poole is a decent end-of-the-rotation player with potential. Wiseman and Wiggins have already been discussed. The ability to pick seventh and then back-to-back at 14 and 15 would also be nice. On the other hand, stockpiling picks could allow GM Tommy Sheppard to move up even further in the lottery. If Beal’s market ever heats up, this package may be one for the Warriors to get on the phone and pitch to the Wizards.

Instead of Wiggins accompanying Wiseman in a trade, this time it’s Oubre in a sign-and-trade scenario. Valanciunas has quietly become one of the more productive centers in the league and would give the Warriors a reliable presence on the inside. Anderson has starting experience but could also come off the bench and provide a well-rounded game. Keeping Wiggins is the icing on the cake.

While this package may not make a ton of sense to Grizzlies fans, it complements their timeline much better. Oubre is two years younger than Anderson and is a much better athlete with a higher ceiling. Wiseman has oodles of potential. Having the seventh pick in the draft to work with, as well as their own pick (17) allows Memphis to fully embrace the youth movement. In a total reset move, they sacrifice stability for long-term possible success and immediate draft capital.