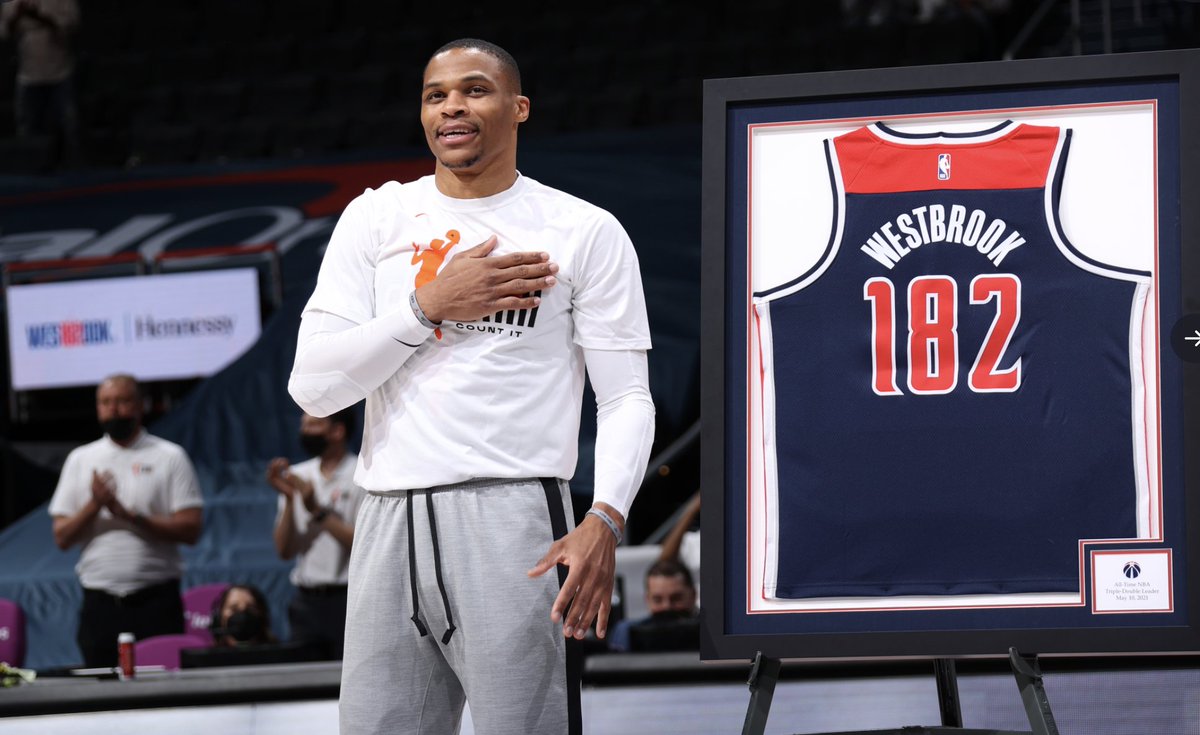 The Washington Wizards took down the Cleveland Cavaliers 120-105, as they clinched their first postseason berth since the 2017-18 season. They will still have to get through the play-in tournament, however, in order to be a part of the first round of the Eastern Conference playoffs.

On a night that Russell Westbrook was honored in front of his home fans for passing Oscar Robertson for first on the all-time triple-double list, he put up yet another one, finishing with 21 points, 17 assists and 12 rebounds to go along with three steals. In those 17 assists, Westbrook turned the ball over just once!

It was a close game in the first half, but the Wizards pulled away in the third quarter, outscoring the Cavs 33-20. The Wizards’ biggest pull-away moment came within the final three and a half minutes of the third, closing out the quarter on an 11-1 run.

Washington was able to build their lead up to as many as 19 early on in the fourth, seeming like they were well on their way to an early celebration for a spot in the postseason. However, Collin Sexton and Jarrett Allen combined to go on a 12-2 spurt to bring the scoring margin back to single digits, prompting the Wizards to take a timeout.

From that point on, the Wizards were able to hold off the Cavs and cruise away with the victory.

Given all of the circumstances the Wizards had to deal with all season long, from Westbrook playing through a torn quad injury early on to missing essentially two weeks worth of play due to a COVID-19 outbreak within the organization in January and being a season-high 15 games under .500 on April 5th after Bradley Beal‘s five-game absence, it’s quite amazing to see how the Wizards have been able to bounce back and find themselves in this situation.

“It’s a great feeling for everybody involved,” head coach Scott Brooks told FortyEightMinutes and other media via zoom. “We chipped away, we were down, took a bunch of punches, but we just kept standing back up and fighting for one another.”

The Wizards being 15 games under .500 seemed to be a major turning point for the organization, as they’ve gone 16-6 since that point.

“I think what’s been a big part of our mentality is just we’ve been looking at the next game ahead of us, and the next day.” Robin Lopez told FortyEightMinutes and other media members. “Break it up into little pieces, the next quarter, next possession, that’s very key for us, and I think that’s going to be huge for us going forward as well, particularly when you talk about playoff basketball.”

While a matchup against the Milwaukee Bucks is unlikely this postseason for the Wizards, it was hard to fight the urge to ask Robin about the possibility of facing his brother, Brook Lopez, in the postseason.

“I don’t think he’s even coming out on the scouting report is he? Nobody’s talking about Brock Lopez,” Lopez joked after the game.

The Wizards will likely draw a matchup against the Indiana Pacers or Charlotte Hornets in the first game of the play-in tournament, but if they win their next game and the Pacers and Hornets lose their next two games, then they will end up facing off against the Boston Celtics.