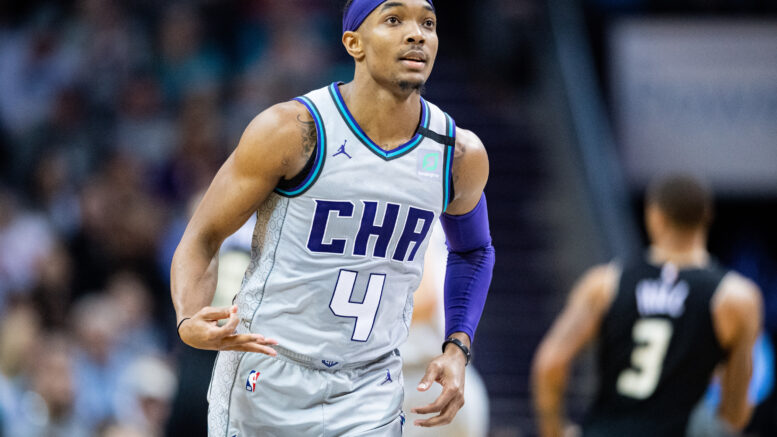 CHARLOTTE, NORTH CAROLINA - MARCH 01: Devonte' Graham #4 of the Charlotte Hornets reacts after a three point basket during the fourth quarter during their game against the Milwaukee Bucks at Spectrum Center on March 01, 2020 in Charlotte, North Carolina. NOTE TO USER: User expressly acknowledges and agrees that, by downloading and/or using this photograph, user is consenting to the terms and conditions of the Getty Images License Agreement. (Photo by Jacob Kupferman/Getty Images)

The Pelicans may have lost Lonzo Ball in free agency but the team was able to acquire a replacement rather quickly. The Hornets are sending Devonte’ Graham to the franchise via a sign-and-trade deal.

Graham, who was the No. 34 overall pick back in 2018, is receiving a four-year contract worth $47 million upon arrival in New Orleans.

The deal will reportedly send a 2022 first-round pick back to Charlotte in exchange for Graham.

The young guard averaged 14.8 points and 5.4 assists while shooting just above 37% from the field and beyond the arc. The Pelicans have certainly been in need of a solid shooter alongside Brandon Ingram with Zion Williamson dominating the paint.

Graham may be able to fit that role and see himself be the ball-handler in certain situations as well.