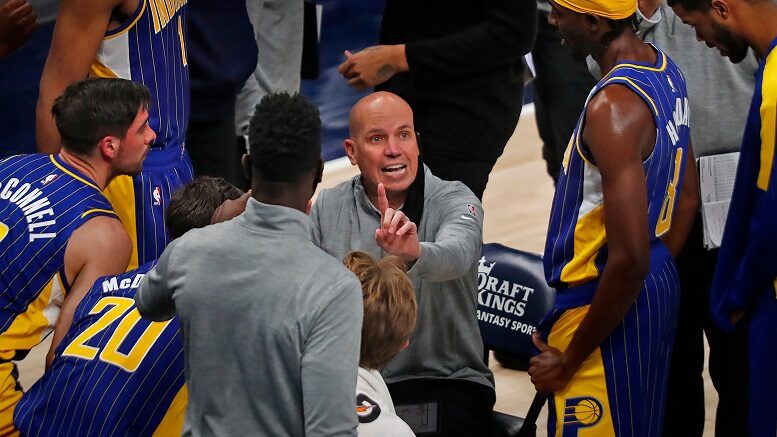 Nate Bjorkgren hasn’t even completed his first season as Pacers coach and already he appears to be on the hot seat.

Per ESPN’s Adrian Wojnarowski, Bjorkgren’s future with the franchise is “uncertain,” despite the fact the injury-riddled club is on the cusp of another playoff berth. Bjorkgren is in his first year as a NBA head coach after five years as an assistant, most recently with the Raptors.

Wojnarowski reported that Bjorkgren has had issues with both players and members of his staff, leading to “team turmoil” both in the locker room and on the court.

Meanwhile, J. Michael of the Indianapolis Star cited “micromanagement” as being among the reasons the players and assistant coaches have struggled to adapt to Bjorkgren. Michael actually referred to it as a “major issue.”

Either way, it’s pretty clear the Pacers (31-33) are reviewing if he’s the best fit moving forward. Per Michael, the idea of Bjorkgren remaining with the team could be considered “tenuous.”

Since trade deadline this still remains the case. Bc of the guaranteed year for 2021-22, there’s an expectation he could stay but that would be tenuous. What has been certain for a while is his assistants will be overhauled (or leave voluntarily). Micro-management = major issue https://t.co/iRJIe6z8cc

Bjorkgren signed a three-year contract and replaced Nate McMillan, who led the Pacers to the playoffs in each of of his four seasons, including three straight second-place finishes in the Central Division. But McMillan was fired after the Pacers failed to advance past the first round with him on the sideline.

McMillan is now the interim coach of the Hawks, who entered Tuesday with the fourth-best record in the Eastern Conference.

As for the Pacers, it’s seemingly been one key injury after another, with All-Star power forward Domantas Sabonis, center Myles Turner and small forward T.J. Warren all missing significant stretches. Warren is out for the season and Turner may be, too.

At the same time Sabonis returned, the Pacers lost starting point guard Malcolm Brogdon to ankle injury. Brogodn is said to be day-to-day.

Along with all that, the Pacers acquired shooting guard Caris LeVert earlier this season as part of the trade that sent Victor Oladipo to the Rockets. (Oladipo is now with the Heat and injured.)

So it’s been a fairly rocky season of challenges for a team that, until this year, had put together an NBA-best 31 straight winning seasons at home.

“This season has been unlike any I’ve been a part of, and it’s proven to be challenging on many fronts,” Pacers president of basketball operations Kevin Pritchard recently told Bob Kravitz of The Athletic. “I’ve got a lot of scar tissue from this season; we all do.

“In some ways, it’s been less about basketball than a lot of other things. But look at it, we’re a few games within fourth, and to go through what we’ve gone through as far as injuries, I want to see how this one plays out.

“We could have shut it down, but we’re playing hard; we’re just severely undermanned right now.”

Be the first to comment on "Report: First-year Pacers coach Nate Bjorkgren on shaky ground"