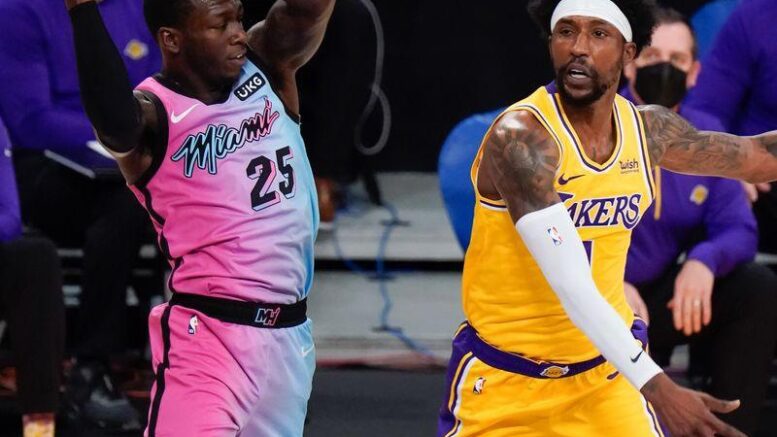 After a slow start to the 2020-2021 season, the Miami Heat are turning things around. They were able to get a huge win against the defending NBA Champions, the Los Angeles Lakers. Kendrick Nunn of the Miami Heat has been coming on strong lately. Tonight was no different as he led the Heat in scoring with 27 points. Nunn shot 10 of 14 from the floor. He also knocked down 5 of 6 from the three-point line. Add on 5 rebounds and 3 assists and Nunn had himself a good night! Nunn spoke on the Heat’s improvement postgame.

“You can tell that the chemistry is building,” said Nunn, who hit five 3-pointers. “We’ve been together for a week and a half, and it just gives us more of a feel for each other. We’re moving in the right direction now. We dropped a couple early, but we’re starting to give ourselves the best chance at the end of the game.”

No one is safe 👀 pic.twitter.com/hUhZ2zSMYx

Jimmy Butler played a solid game as well. Dropping 24 points. Bam Adebayo also added 16 points and 10 rebounds. This was the Heat’s second straight victory. And a big win over a Lakers team that is doing well at 22-9 on the year. But they are dealing with a key injury to one of their Superstars in Anthony Davis. And also with starting Point Guard, Dennis Schroder. The Heat didn’t take it easy on them. The game was a grind-it-out affair with the Heat coming out on top. Miami now sits 1 game behind the 8th place Knicks with a 13-17 record. With victories like tonight, the Heat are on their way to turning things around.