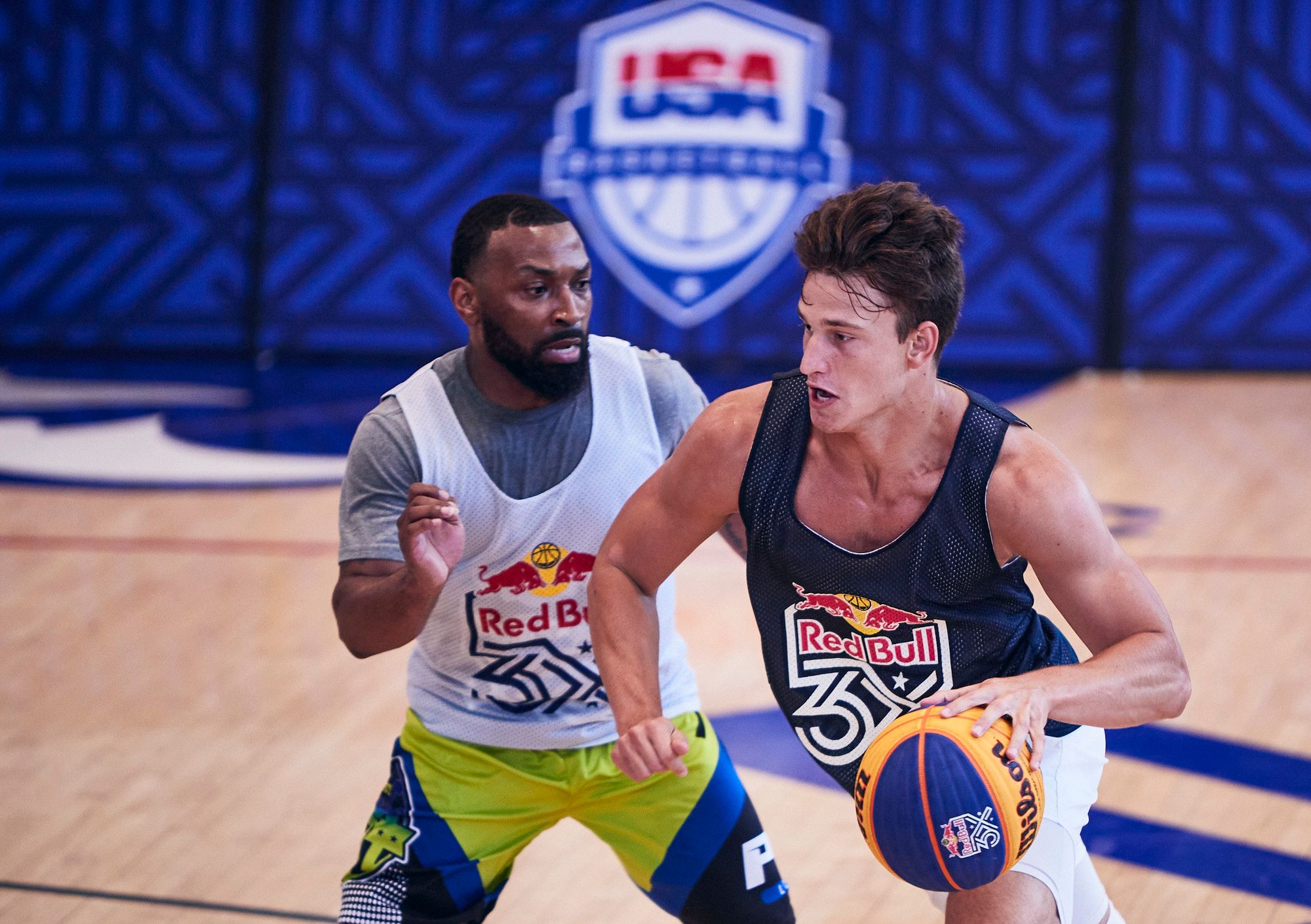 The 3×3 game isn’t as big in the United States as it is in other parts of the world, though with the FIBA event becoming an Olympic sport, perhaps that’ll drastically change.

The game isn’t without history in the US, as a handful of hoopers have used the format to make it to the NBA. Alfonzo McKinnie turned his 2016 performance in the 3×3 World Cup into an NBA tryout and has since played for the Raptors, Warriors, Cavaliers, and Lakers. Juan Toscano-Anderson used the Red Bull’s 3×3 tournaments to sharpen his skills ahead of getting called up from Santa Cruz Warriors of the G League to the Warriors.

Robbie Hummel, who was drafted in 2012 and played two seasons with the Timberwolves, has thrived in the 3×3 format, leading the United States to a gold medal in the 2019 World Cup.

“Honestly, the biggest motivator was the Olympic aspect of it,” Hummel told FortyEightMinutes when asked about how he got involved in the format.

While the United States Men’s team didn’t qualify for the latest Olympic Games in Tokyo, USA Basketball, Hummel, and other players have already begun to go full speed forward at Red Bull 3X qualifiers around the country as they look to represent Team USA in the 2024 Olympic Games.

Competing in a Red Bull 3X Qualifier: An Inside Look

WASHINGTON DC — Wizards in-game host Britt Waters and Sixers in-game host Christian Crosby shared duties of hyping up the crowd at Howard’s Burr Gymnasium. giving the Red Bull 3x event even more of an entertainment feel as both male and female players gathered to compete in their respective tournaments.

The level of play in the woman’s bracket was immediately clear. The majority had excelled at the NCAA level and many, including former Mystic Jennie Simms (whose team won the women’s event in DC), had reached the professional ranks. With USA Basketball earning a gold medal in the first Olympic 3×3 games behind a quartet of WNBA standouts, winning a 3X qualifier meant competing with the upper echelon of female basketball in the United States.

On the men’s side, the competition remained fierce, though the talent pool was slightly more diverse in background, skill level, and journies to the qualifier.

Mixed in with former D1 athletes were various levels of ballers, some of whom cashed checks professionally around the globe while others were unlikely to ever see a profit from their on-court ventures. While there were no official heights listed of the players in the men’s bracket, participants included a handful of bigs clearly in the 6-foot-8 range and a few guards who would have looked Muggsy Bogues directly in the eyes.

One team used sign language to communicate, as members of their squad played through hearing impairments. Another —Team Ballin for Christ— competed for the Jesus with Gabe Davila, who previously played basketball professionally in Mexico, leading a squad that was partially supported by the Gateway Church in North Ridgeville, Ohio.

There was a former MTV reality star present: Randy Gill (aka White Chocolate), who won the network’s $100,000 cash prize on “Who’s Got Game?” back in 2003. Gill, who once helped convince Kevin Durant to play at Rucker Park, won the 3×3 Tournament when it came to DC back in 2017.

“The intensity level is very high,” Gill, who had said of the 3×3 format. “You got to do things quick and you have to be efficient. The speed and pace of the game makes it intense. It’s very good competition.”

Several squads were put together by Paul Easton, who is well-known in the DMV, helping to develop talent ranging from high school through the professional level. Easton, who learned the game of basketball growing up in Scotland, knows the 3×3 format very well.

“It’s moving the ball fast, the way that the NBA, the college game, the high school game are all evolving to,” said Easton, who also offers coaching through his video training app.

The DMV was well-represented with local talent compiling a bevy of teams, though many competitors traveled from afar to play in the tournament. Longtime Philly hooper Legend Lawson and his three teammates drove down 1-95 from the City of Brotherly Love to compete in the event. Team No Name Nashville had members from Tennessee and Missouri present while other teams have players traveling from Florida, Indiana, Illinois, and Texas among other states to compete in the tournament.

Noah Lack flew from Houston to Washington DC without real assurance that his team, Athletes and Assets, would be able to play in the games. His squad had placed second in the Philadelphia 3X competition the week prior and he couldn’t commit to making the DC trip until a few days before the event. Luckily, his team was able to get off the unexpected waitlist and into the field of 24 teams (the maximum allowed at any qualifying 3X event).

Lack’s team found more success in their second event, making it to the elite eight of the DC tourney before losing to Team 1 (led by Gill). The former Santa Clara guard, who hosts the Athletes and Assets podcast, said he would like to play in future events, though he has to juggle his 3×3 career with his ambitions to play for the USA team in the 2022 World Maccabiah Games in Israel.

The backgrounds and experience levels of those participating in RedBull 3X qualifying tournaments across the country may differ, though they all have a common goal: to represent USA Basketball on the world stage. While the Tokyo Olympics are about to conclude, the journey to being part of the 3×3 games in France has already begun. 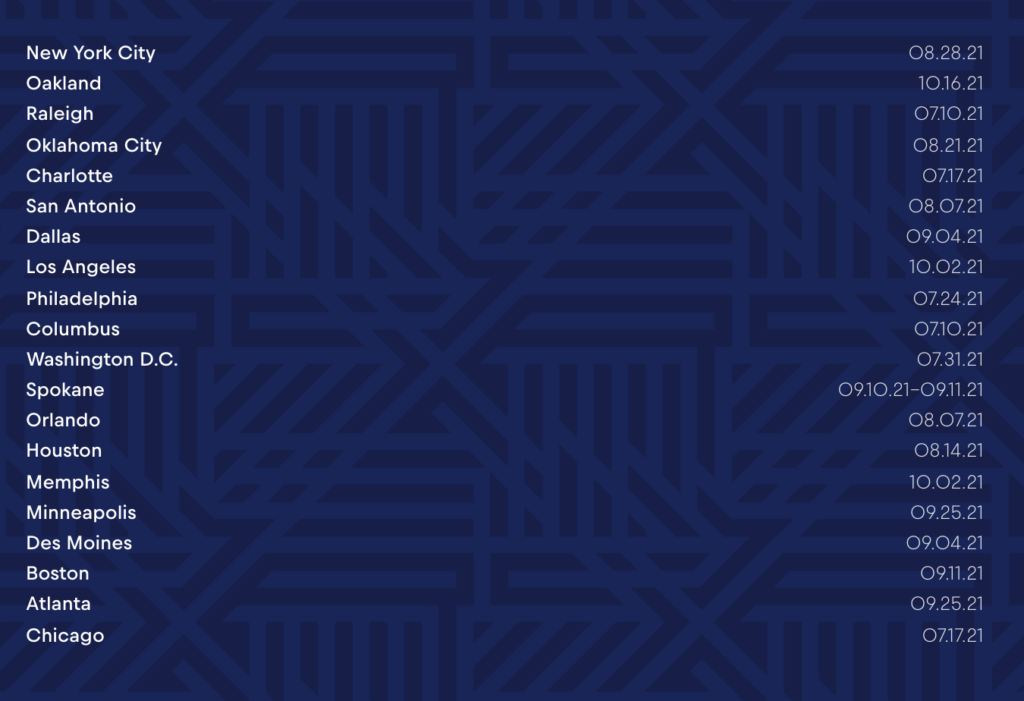 Christmas Day 2022 is full of fantastic NBA games, including Lakers-Mavericks where LeBron James and Luka Doncic are set to...

The NBA has no immediate plans for expansion, though it's wildly assumed that Seattle will be getting a team should...

The NBA season is about to kick off and it's time for our third annual 48 bold predictions feature. Last...