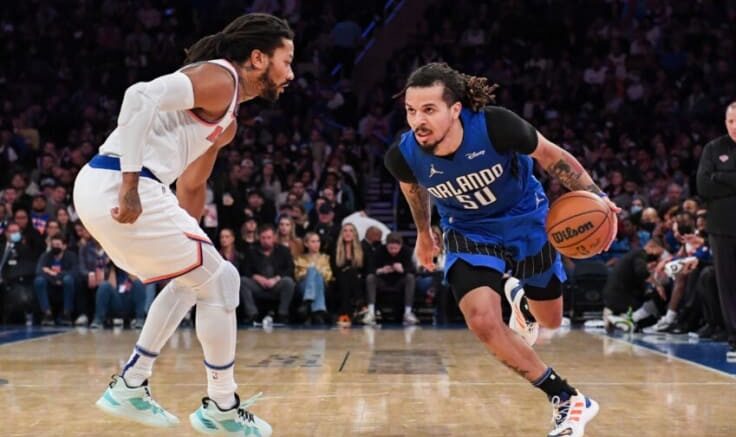 The Orlando Magic earned their first win of the season at Madison Square Garden in Manhattan last night. The Magic defeated the New York Knicks 110-104. New Magic Head Coach Jamahl Mosely earned the first win of his Head Coaching career as well. Coach Mosely was extremely happy with his team’s effort and the way they were able to fight back to get the win.

“We picked up ball pressure a little bit. Understanding who are the shooters (and who) are not the shooters,” Magic coach Jamahl Mosley said when asked what specifically had changed for his team defensively between the two games. “Our guys did a good job recognizing who was where and we flew around the court. Just multiple efforts, making sure we contested all shots.”

Cole Anthony had himself a career night. He recorded his first double-double of his career at MSG. He scored 29 points and pulled down 16 rebounds on the night. He also dropped 8 assists on the night as well. Anthony is solidifying himself as the Magic’s Point Guard of the future. Anthony spoke on how proud he was of not only his individual performance. He spoke on how proud he was of his team’s performance as well.

a career night for Cole 💫

“It kind of showed. … We showed ourselves tonight, showed the coaching staff, showed everyone how we can be a pretty good team,” Anthony said. “We’ve put ourselves at a level, we’ve kind of shown a level we can play at. So now maintain that level and then not just maintaining, but building off of it.”

Last night at New York, @TerrenceRoss scored all 22 of his points during the 4th quarter.

It is the most points scored in the 4th quarter in @OrlandoMagic history.

Be the first to comment on "Cole Anthony Records First Career Double-Double, Leads Magic Past Knicks in NYC"