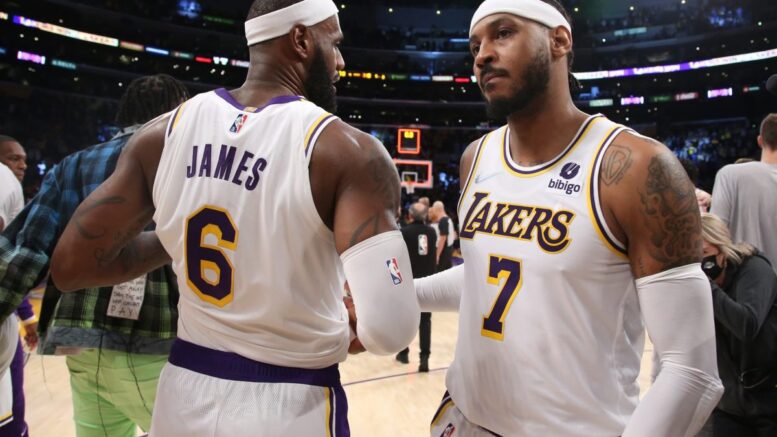 The Los Angeles Lakers have now found their way into the win column for the first time this season, improving to a 1-2 record on the season after defeating the Memphis Grizzles 121-118.

The Lakers were able to get key contributions from multiple players. However, this night belonged to Carmelo Anthony.

Anthony officially moved to ninth on the NBA’s All-Time Scoring List. He passed Moses Malone on a three from the leftwing. In all, Anthony scored 28 points on 10-of-15 shooting from the field. He also knocked down 6-of-8 attempts from the three-point line while also contributing three rebounds on the night (28 minutes total). Anthony reflected on what it means to him to be able to move to ninth on the scoring list:

“I keep saying it’s an honor and blessing to be on that list and pass Moses (Malone) for what he did for the game of basketball,” said Anthony, the third overall pick of the 2003 draft. “It’s hard to put it into words. That I’m still here and doing it, that’s what I’m excited about, that’ I’m here in year 19 and doing what I’m able to do. I’m still passionate about the game, and I’m still passionate about coming to work and getting better.”

LeBron James scored 19 points, grabbed 6 rebounds and dished out 6 assists on the night. James was overjoyed for his dear friend, Anthony. LeBron James and Carmelo Anthony’s friendship goes back to when both players are were in high school. They got drafted together in 2003 so both have been on this journey together since then despite playing for different teams up until this season. James reflected on Anthony’s performance to reach this milestone and lead the Lakers to their first win of the season.

“I think it’s always sweeter when you win and even more sweeter when it just happens organically,” James said of Anthony’s milestone. “He was playing straight up flow and rhythm basketball. To move into ninth all-time on the scoring leaderboard is special. Usually, when some of my friends have these kind of achievements, I text them or call them or Facetime them and put something on social media. In this case, I got to do it in person because he’s my teammate now. I got to do it in person. That made it special for me.”