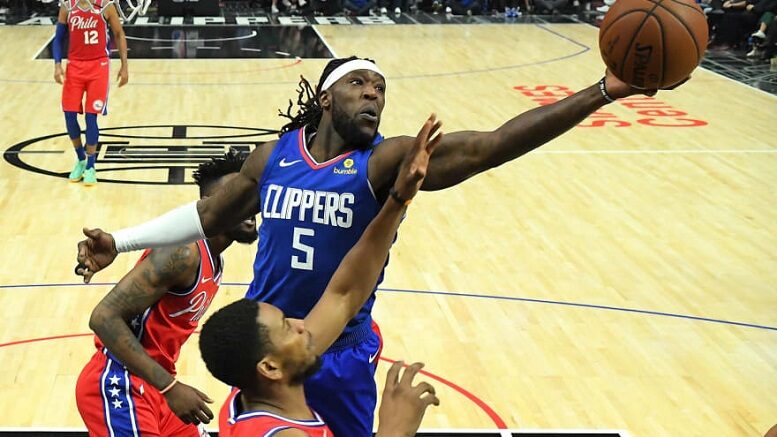 Clippers forward/center Montrezl Harrell grabs a rebound vs. the 76ers.

The Clippers bench will look different during the 2020-21 season. Tyronn Lue will sit in Doc Rivers‘ old seat, leading a team that underachieved during the bubbled 2019-20 campaign.

Lue, who joined the team as an assistant prior to last season before getting the promotion this offseason, will likely see a slightly different group of guys at his disposal in his first year as Los Angeles’ coach, particularly in the frontcourt where Montrezl Harrell and Marcus Morris will be both be unrestricted free agents.

The Clippers have interest in re-signing Harrell if the price is right, per Andrew Grief of the Los Angeles Times. Harrell’s underwhelming postseason along with the lack of teams with cap space could force the big man to take a team-friendly deal (at least a short-term one), which could allow LA to bring him back.

As for Morris, whom the Clippers gave up a first-rounder for at the trade deadline, there’s no word on the team’s plans as he hits free agency for the season straight offseason.

Back in the 2019 offseason, Morris verbally agreed to a two-year deal with the Spurs worth slightly under $20 million (San Antonio was using the MLE), though the Philadelphia-native backtracked on his word, opting to take a one-year pact with the Knicks ($15 million). While it wouldn’t have been the biggest deal except for the fact the Spurs had dealt away Davis Bertans in a three-way trade with the Nets and Wizards in order to acquire DeMarre Carroll, who was originally earmarked for their MLE (thus freeing up the money to sign Morris).

San Antonio frantically pivoted to signing Trey Lyles, who was unable to help them extend their postseason streak, and Morris went on to played 43 games for the Knicks before being sent west.

Be the first to comment on "Latest on Clippers’ interest in free agents Harrell, Morris"