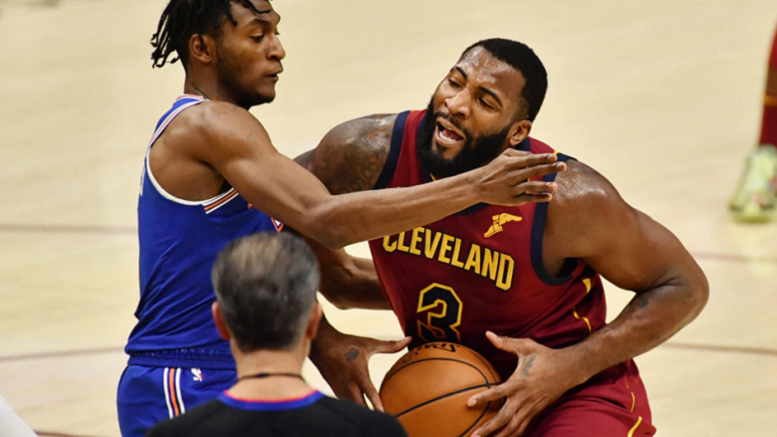 Veteran center Andre Drummond is being held out until the Cleveland Cavaliers finalize a trade, and Drummond would consider the New York Knicks to be “a good landing spot,” sources tell Marc Berman of the New York Post.

Meanwhile, it is believed the Knicks have made young forward Kevin Knox available for the right deal.

The Cavs have already spoken with the Toronto Raptors about a possible Drummond trade — and intend to explore all their options and listen to opposing pitches before deciding on a trade ahead of the March 25 deadline.

They are hoping to avoid a buyout of Drummond’s expiring contract. He is due $28.7 million this season.

Along with the Raptors and now Knicks, Drummond has been linked to the Boston Celtics, Charlotte Hornets, Portland Trail Blazers, Los Angeles Clippers and Brooklyn Nets.

Sources told FortyEightMinutes the Celtics in particular have a “strong” interest in Drummond. It is not known if the Knicks too are interested.

The Cavs and Drummond agreed that he will remain with the team, but not play, until a resolution is reached.

Drummond and Cavs coach J.B. Bickerstaff had multiple conversations recently about Drummond’s “attitude and play,” Shams Charania of The Athletic reported. Today, the Cavs are going with starter Jarrett Allen and backup JaVale McGee as their centers.

Allen met the starter criteria on Monday vs. the Golden State Warriors and is now eligible for restricted free agency at the end of the season.

The Cavs could have a difficult time trading Drummond because of his contract, according to ESPN’s Bobby Marks.

“Here’s the big question I have when it comes to Andre Drummond,” Marks tweeted. “What happens at 3:01 p.m. on March 25 (trade deadline) when he hasn’t been traded and has been shut down for five weeks? Could be a difference-maker if there’s a buyout down the road.”

Drummond led the NBA in rebounding last season and is averaging 17.5 points and 13.5 boards in 25 games this year.

The Knicks (14-15) currently sit in sixth place in the Eastern Conference under first-year coach Tom Thibodeau. The Cavs (10-19) have dropped eight straight.

1 Comment on "Cavs’ Andre Drummond would welcome trade to Knicks"