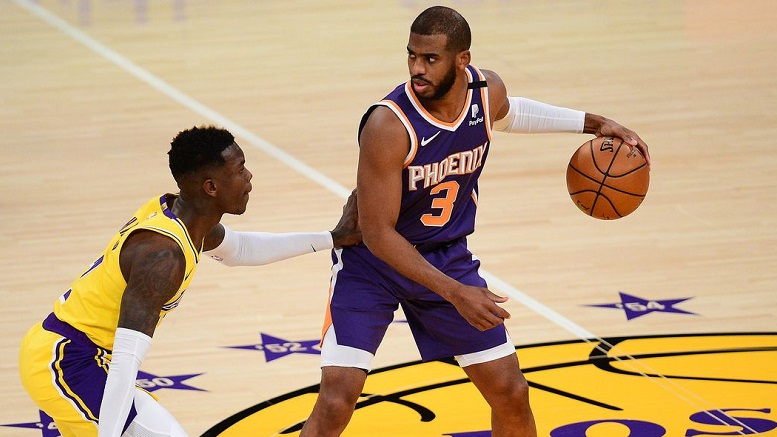 The Phoenix Suns faced adversity in the Staples Center when star shooting guard Devin Booker was ejected. Despite Booker’s ejection the Suns were able to get a big 114-104 road win over the Los Angeles Lakers.

Booker did score 17 points before he was ejected. However, the Suns still won without him in the game. They were able to play as a balanced unit and that is what propelled them to victory.

“You gain confidence when a guy like Book doesn’t play or gets tossed, and you’re able to pull a game out on the road at the end of a trip,” Phoenix coach Monty Williams said. “That’s a recipe for mailing it in … but that was a big-time character win. We got better. I think we played good tonight, but we probably got more confidence that we can pull a game out without Devin or Chris (Paul) saving the day.”

This is it. This is THE PLAY. pic.twitter.com/zAt4H3RDHk

If the Suns look to keep up their surprise and great play they have to continue to get big victories like this. Especially if Phoenix hopes to be consider Championship contenders themselves.

With victories like this one they are on their way. Phoenix currently sits at 2nd place in the West. Tied with the Los Angeles Lakers headed into their last game before the NBA All-Star break. They face the Golden State Warriors in Phoenix Thursday, 3/4/21 at 10 pm Pacific/ 7 pm Eastern.

Let's get your caught up on the latest buzz from around the NBA: The Suns are bringing back Deandre Ayton...

The Jazz might have their eyes set on a package centered around future first-round picks and a young player on...

Let's get you caught up on the latest NBA Buzz, including Deandre Ayton rumors, Collin Sexton's status and some Rockets...