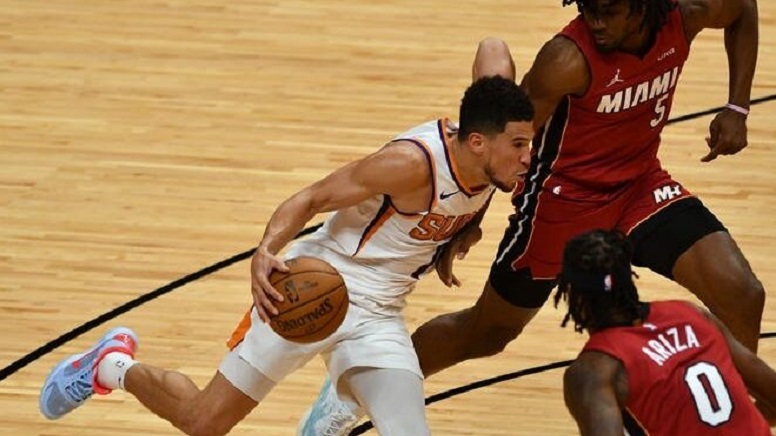 Suns guard Devin Booker drives to the basket vs. the Heat. - USA Today.

The Phoenix Suns are on an absolute roll. The Suns defeated the Heat 110-100 in Miami. They have now won 7 road games in a row. They now have a 29-13 record on the season. Devin Booker once again led the way for the Suns. He scored 23 points, grabbed 5 rebounds, and dished out 3 assists. He shot 10 of 19 from the field as well. Suns’ Head Coach Monty Williams is proud of his leading star, Booker. He is also happy with his team as a whole.

A look from the first half!

“I don’t want to make declarations about us,” Suns coach Monty Williams said. “I just like winning games and winning with our defense against a really good team — a team with a championship pedigree and a team that’s been where we want to go.”

Former Miami Heat Guard Jae Crowder returned to Miami. He scored 13 points and grabbed 3 rebounds on the night. Crowder was on the Heat team last year that made an NBA Finals run. He spoke on how he was proud of his Suns team postgame. It meant a little more to I’m because he was facing his former team.

“I felt like we were all engaged mentally with the game plan and it translated out on the court,” Crowder said. “We had control of the game the whole way through.”

"I feel like we were all engaged mentally with the game plan and it translated onto the court… It was obviously a great start of the road trip for us."
– @CJC9BOSS

Hear from the guys tonight! 👇

The Suns controlled the tempo the whole game as Crowder stated. They are starting to figure things out and have established a team identity. Establishing a team identity and having clear leaders on the team in Chris Paul and Devin Booker make a world of difference. They are plugging away and look to continue their winning ways as the season progresses. Next game: The Suns visit the Orlando Magic on Wednesday, 3/24.

Be the first to comment on "Suns continue hot play, defeat Heat in Miami"