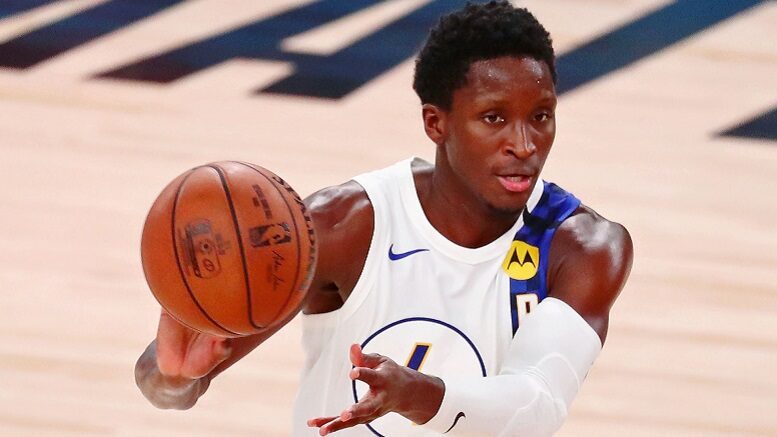 Indiana Pacers guard Victor Oladipo shot down rumors that he wants to part ways with the franchise, saying in an Instagram Live session that “I’m a Pacer.”

Oladipo is eligible to enter free agency at the end of next season, and a recent report from The Athletic said that he was “looking to move on this offseason.”

“I’m a Pacer. I’m a Pacer,” Oladipo said. “Those rumors on the internet, I don’t know where they’re coming from, I’m just focused on getting my knee right for next year.”

Oladipo is a 6-foot-3 and played college basketball at Indiana. He was acquired by the Pacers (along with power forward Domantas Sabonis) in the Paul George trade with the Oklahoma City Thunder in 2017. Since then, Oladipo has become an All-Star and Pacers fan favorite.

He spent the season coming off major surgery on his right knee. He suffered injury in January 2019 and appeared in just 13 games before the league went on hiatus in March.

He seemed to be coming around, slowly but surely, but the suspension of the season changed everything. Oladipo went from playing five-on-five in NBA games to trying to rebuild the knee … well, mostly alone.

The Pacers were swept out of the first round of the Eastern Conference playoffs by the Miami Heat. It marks the second straight season in which the Pacers suffered a 4-0 loss in the first round. They are currently in the midst of a coaching search.

Oladipo is eligible to become a free agent at the end of next season, provided he doesn’t sign an extension. According to J. Michael of the Indianapolis Star, free agency is precisely what Oladipo intends to test.

“I’m not really worried about that right now,” Oladipo said immediately after the Pacers’ season ended. “I’m just focused on making sure I get my knee right, get fully strong, get my health where it needs to be. I’ll worry about all that when the time comes.”

Pacers president Kevin Pritchard added that winning will be the key to keeping Oladipo in Indiana.

“I’m hopeful that we can create an environment that he feels good about, that he feels like he can win,” Pritchard said. “He’s been pretty consistent in saying the most important for him is that he can win. I believe we can have a team that can do some good things in the playoffs.”