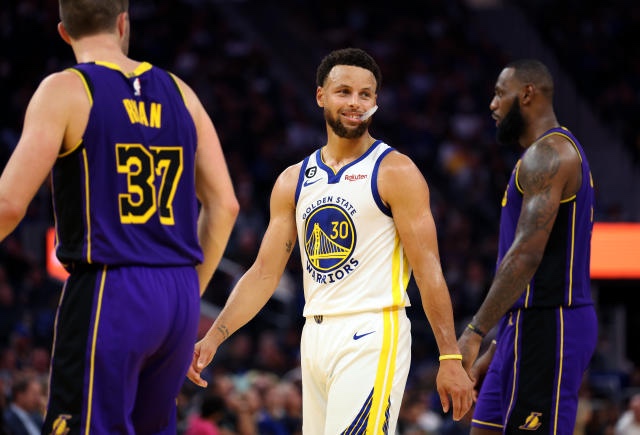 Warriors’ Head Coach Steve Kerr spoke postgame about how proud he was of his team’s effort in the 123-109 win.

Forever in the rafters pic.twitter.com/AnhuHtatf3

“I’m thrilled with the win,” coach Steve Kerr said. “Ring night is never an easy game and the first game of the season is usually filled with some nerves early on.”

Jordan Poole recently signed a four-year, $140 million dollar contract extension. He started off the season with a solid performance off of the bench. He scored 12 points and dished out 7 assists on the night. Poole spoke postgame regarding the Warriors’ mindset coming into the game and how they executed it.

hand down
man down pic.twitter.com/TpCX4eRxW2

“We went out there, we had a job to do tonight to win a game,” Poole said when asked if healing has happened between him and Green. “It was a ring night and that’s really what we were focused on finishing the first game. It was a huge win against a really good team.”

Stephen Curry led the way for the Warriors with 33 points on 10 for 22 shooting from the field. Curry knocked down 4 for 13 from behind the three-point line. He also grabbed 6 six rebounds and dished out seven assists on the night.

Mama, there goes that man.@googlecloud || Player of the Game pic.twitter.com/oMPDVFIlIK

The Warriors start the season off on a high note with a victory. They will face the Denver Nuggets next on Friday, 10/21. Tip-off is at 7 pm Pacific time from the Chase Center in San Francisco, California.