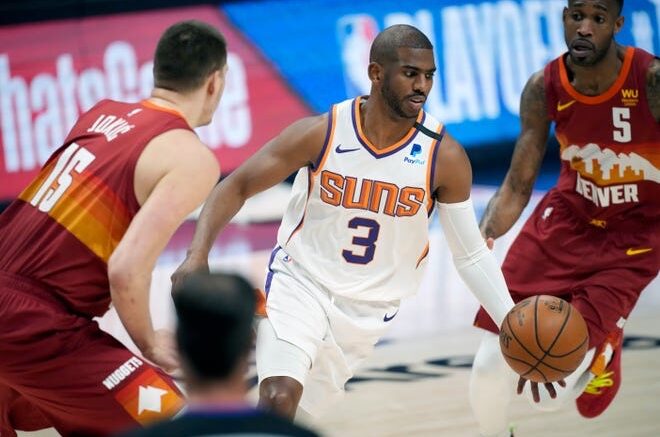 The Phoenix Suns are rolling right now, completing their sweep in their second-round series against the Denver Nuggets, winning Game 4 by a score of 125-118.

Phoenix is showing that their first-round win over the defending NBA Champion Los Angeles Lakers was no fluke. This was the team’s seventh straight Playoff victory and the Suns have now advanced to the Western Conference Finals for the first time since 2010. They also became the first team to sweep an NBA MVP (Jokic) out of the Playoffs since 1989.

The Suns are claiming that it is their time and their year. The results are proving that to be true thus far.

16 points on the board. pic.twitter.com/uLQGZox96u

Chris Paul led the way for the Phoenix Suns. He scored 37 points on 14-of-19 shooting from the field. He also grabbed three rebounds and dished out seven assists. CP3 seized the moment for sure and led his team to a second-round sweep of the Nuggets.

Devin Booker had some great things to say about what Chris Paul means to the Suns’ organization.

"Basketball aside, he means so much to me and my family. To be on this journey with him and to see it paying off is nice."
– @CP3 on Monty Williams

Hear from the team tonight!👇

What a series. @FanDuel | Stat Line of the Game pic.twitter.com/J7aJpaAgDP

“You can ask anybody on this team how has Chris developed your game and everybody’s going to have a lengthy answer because he cares,” Booker said.

.@DevinBook and @CP3 become the first Suns teammates to each score 30+ in a playoff game since @SteveNash and @Amareisreal in 2005. pic.twitter.com/UnWN3uabbs

Other Suns’ players contributed to this series sweep of the Nuggets.

The Suns now will be moving on to the Western Conference Finals. They will be facing the winner of the Utah Jazz/Los Angeles Clippers series. Until then the Suns will enjoy their second round series win and get some much needed rest.

Be the first to comment on "Devin Booker credits CP3 for improvement, series sweep of Nuggets"