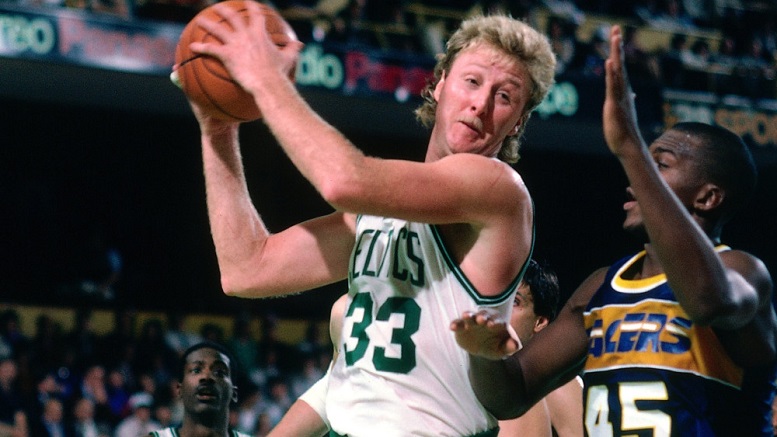 When Larry Bird returned my call, I practically drove off the road.

The year was 2008 and I was writing a story on the U.S. men’s Olympic basketball team. Bird was a member of the original Dream Team of 1992. So I wanted his opinion on the current state of international hoops.

A friend in the industry told me just to call Bird at his office. Like today, Bird was the big basketball decision-maker for the Indiana Pacers.

“Sometimes he answers his own phone,” my friend said, before offering a glimmer of hope. “Worth a shot.”

So I called. Bird didn’t answer. I stammered through a voice mail, saying something about writing a story and wanting Bird’s input.

NBA To Implement Rapid Testing For COVID-19 This Season

That was that. I figured I’d never hear from Bird. He’s a legend. I was doing this, whatever this is.

Five hours later, the phone rang. The call came from an Indianapolis area code. I was driving, and my eldest son, 3-years old at the time, was riding in his car seat. He was crying about something, I have no idea what.

All I knew was Larry Bird may be calling, and the kid couldn’t keep quiet. But I had to answer. I couldn’t miss a call from Bird.

So answer I did. I said hello.

“Sam?” asked the voice from the other end. I just sat in silence, stunned. I recognized that voice, that southern Indiana drawl. “Hey, it’s Larry Bird,” the voice said.

Of course, my son didn’t care if it was Larry Bird, Lady Bird Johnson or Big Bird. He just continued to scream.

I knew Bird could hear it. All of the Midwest and probably a couple New England states could hear it. But before I had a chance to say anything, Bird chuckled and chimed in.

“You either have a child or you’re married, because I hear a lot of bellyaching going on around you,” he said.

I apologized and told Bird I would need to pull over to get out my recorder and find a way to quiet the kid. He laughed and said, “It’s all good, Sam. Take your time.”

Bird was out-of-the-way gracious with someone he didn’t know. He behaved that way through the entire interview. I thanked him at the end of our conversation. “You got it,” he said. “Call me anytime.”

I was a foot shorter, but Bird is the man after whom I modeled my game. I wanted to shoot like he did during his heyday with the Boston Celtics. I wanted to pass, I wanted to be a basketball assassin, I wanted to win.

Julius “Dr. J” Erving made me fall in love with the game. Bird turned it into an obsession.

I would read how Bird often spent six or seven hours a day shooting baskets in his driveway — rain, sleet, snow, didn’t matter. Sometimes, Bird played until his hands cracked, blistered and bled.

Sometimes, he played with swollen ankles, broken fingers or the flu. He just played, and I made sure to play through all of that, too.

I was just a kid who didn’t know any better when Bird was in his prime. No one told me that only about, oh, 12 guys shorter than 6-foot have ever made an impact in the NBA. I thought I could make it. I dreamed I could be on that court, even for just one second, because I worshiped the game like Bird.

Never happened, of course. I did make it to college. I did get a scholarship. I did become the only player shorter than 6-foot in our conference. I even set the school record for 3-pointers in a game (seven). It lasted six months.

But Bird is the main reason I turned my absolute obsession for the game into a career. I learned to write (or at least tried) so I could write about basketball.

Bird turns 60 today. That is why I write this column. It is a landmark birthday for a once-in-a-lifetime player.

A player who helped shape my life — as odd as that may be for a grown man to say about a complete stranger.

But I write this for me as much for me as I do the reader.

I write this simply to say Happy Birthday, Larry Bird. I do basketball because of you.

Got the basketball blues? Pluto’s ‘Vintage Cavs’ can be the cure

One of the ways to either stay ahead of the competition or to rebound from a slow start in season-long...

Los Angeles Lakers forward LeBron James is in his 19th season in the NBA and has been able to avoid...

NBA To Implement Rapid Testing For COVID-19 This Season

The NBA will rely on small, at-home, molecular-based testing devices that can return COVID-19 results in 20 minutes, Baxter Holmes...

The Grizzlies are closing on a trade that sends Jonas Valanciunas to the Pelicans in a multi-player deal, Adrian Wojnarowski...

The Lakers are no stranger to be involved in trade rumors year in and year out. Quite frankly that may...

Ben Simmons has been the talk of the league when it comes to trade buzz. More developments have come to...