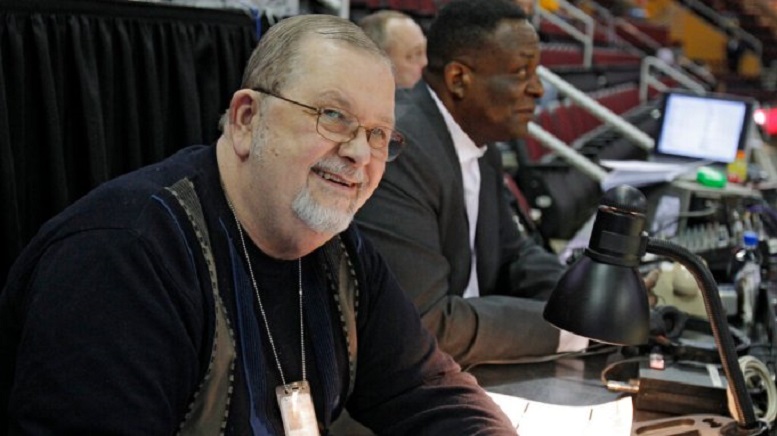 Sometime in the early 1990s, I decided this is what I wanted to do for a living — write about pro basketball.

I was still in college, before the days of the Internet, back when we did our homework via chisel and granite. Not really, but it sometimes feels like it compared to the technology of today.

These were the Brad Daugherty, Mark Price and Larry Nance years of the Cavaliers. It was exciting basketball that was played like you would expect it to be described on Wikipedia. It was lots of passing, cutting, outside shooting and strong inside play. Those Cavs were coached by Lenny Wilkens and they were a team in the truest sense.

But they were rarely on television. SportsChannel, the predecessor to FOX Sports Ohio, was still in its early stages. And the national networks only showed games involving the brightest of stars. When I was a kid, I thought the NBA consisted of just three teams — the Boston Celtics, Los Angeles Lakers and Philadelphia 76ers. After all, those were about the only teams on national TV.

I grew up right outside of Akron, in Cuyahoga Falls. Everyone from my era who loved the Cavs was just like me. We relied almost entirely on Joe Tait as our eyes for the game, his radio voice walking us through the games on 1100-AM, also known as “3-W-E.”

But thanks in large part to Joe, all of that and more eventually happened.

You may not know this, but I grew up in the same neighborhood and on the same street as Jeff Phelps, the longtime pre- and postgame host for Cavs broadcasts on FSO. Jeff was at Kent State and I was in junior high when we first became friends. I only had sisters, so I turned him into my big brother — whether he wanted to be or not.

I would ride my bike to Jeff’s house to look at baseball cards, play basketball in the driveway or just sit and talk on the front porch. He would impart some wholesome college-aged wisdom on my young teenage mind. Jeff was majoring in broadcasting with his sights set on becoming a sportscaster.

As soon as I figured out I wasn’t going to play in the NBA, I wanted to be like Jeff. I wanted to make the NBA my career anyway.

By the time I got to college, Jeff was working as the weekend sports anchor at WUAB TV-43. That is when he introduced me to Terry Pluto, then the pro basketball reporter for my hometown newspaper, the Akron Beacon Journal. Later, Terry took on a mentorship role with me. Eventually, he introduced me to Joe Tait.

And it was every bit as glorious for me as you might imagine. A college kid, meeting one of his hoops heroes. And that hoops hero acting like a regular guy to boot!

I remember that first meeting well, because Joe said some things that never left. When I told him I wanted to be a sportswriter, to cover the NBA, he told me to chase that dream, no matter where I had to start. “Not many people cover the NBA as a full-time job right out of college,” Joe told me. “You gotta go play in the minors first.”

Terry told me the same. So when I sent out resumes and only a small-town newspaper in Wyoming called, well, that’s where I went. From Akron … to Wyoming.

There is no pro basketball in Wyoming. There is no pro anything in Wyoming. So I wrote about the rodeo, or Legion baseball, or sled-dog racing. The highlight of my week was getting to cover the local high school football team on Friday nights. It didn’t even bother me that the team had been riding a 35-game losing streak when I arrived. (It reached 53 before I left.)

But Joe and Terry requested that I mail the newspapers to them regularly anyway. I was in a little town of about 9,500 in southern Wyoming, writing about topics in which even I had no interest. But Joe and Terry wanted to read it. So I’d send a couple of weeks worth of papers to Terry, and he’d pass them on to Joe.

“And not just because I’m probably the only person who reads your stories,” he said.

As Terry has written extensively, Joe loved trains. Actually, loved is putting mildly. It was more like obsessed.

Joe called occasionally when I was in Wyoming. In every conversation, he asked the same two questions:

1. “Will that football team ever win a game?”

2. “Have you been to the train station in Evanston yet?”

Joe was talking about Evanston, Wyoming, located near the Utah border, about a four-hour drive from where I lived. But I’d only been to Evanston once, and if there was a train station there, I sure didn’t notice.

Joe didn’t care about any of that. He just reminded me that I absolutely had to see it. He even said we could meet there next time the Cavs visited the Utah Jazz. I said “sure,” but didn’t really have any interest. I just wanted Joe and Terry to get me a real job. I just wanted a job writing about the NBA.

ROAD TO THE CAVS

After about eight more newspaper stops and approximately four boneheaded moves, I somehow lucked my way into a job writing for NBA.com. Out of Cleveland, no less. It was very part-time — like $150 a game. That was in 2005.

I also started my own website, ProBasketballNews.com. One of the early writers for that site was Chris Haynes, now of Yahoo Sports and currently one of the top NBA newsbreakers.

But that is also about the time Joe stopped reading my stuff. I thought it might be because I fell out of favor. I thought maybe I did something to offend him.

Turns out, it was none of those things.

Instead, Joe explained that he didn’t use the Internet. “Print out your stuff and bring it to me,” he said.

So that’s what I did. Every few weeks I’d bring Joe printouts of my stories in a Manila folder, placing it on the perch from where he called Cavs games inside the arena. One time, I looked over and he was holding up one of the stories. I assumed it was during a commercial break.

A few days later, someone told me Joe had mentioned my story on the air. A few weeks after that, I was on the air with him. And about a year later, FOX Sports Ohio offered me a job to cover the Cavaliers.

In fact, Jeff Phelps and I even ended up co-hosting our own weekly TV show — Cavaliers in the Paint. We would sometimes laugh about how everyone from our old neighborhood must be thinking, “What are those two dorks doing on TV, together?”

Anyway, Joe never really offered much feedback on my stories. Not directly. Though sometimes Terry would tell me, “Joe really liked your story on (fill in the blank).”

Terry was a strong mentor for me. But there were times I disappointed him early in my career. And something he said has always stuck with me, despite the fact it was almost 20 years ago. It was one of those things that you don’t respond to outwardly, but makes a major difference on the inside.

Mostly, it made me realize that it was time to stop messing around, pull it together, and get back to pursuing my dream the right way.

“Joe told me not to give up on you,” Terry said.

Terry never did give up on me. Neither did Joe. And here I am, covering the NBA out of Cleveland. It’s been my full-time job for more than a decade.

Joe died Wednesday at the age of 83. He lived not far down the road in Lafayette Township. I live in Medina.

I actually have a lot of Joe stories. One of the more memorable involved the two of us being featured speakers at a Cavs event in Akron. Joe and I rode together. He insisted I drive and pick him up. There were about 150 fans in attendance. Joe went first. All 150 were glued to his every word.

For some reason, the event organizers decided I would follow Joe. I ended up speaking to about 11 people. Or maybe it was eight. All I know is I wanted to get out of there from the very second I took center stage.

Joe waited for me in the car, but he knew what happened.

“Don’t feel bad,” he said, smiling. “I invited everyone back to the car for donuts.”

He was joking, of course. But it did make me feel less, uh, irrelevant. I mean, I was sharing a laugh with Joe Tait, who today is in the media wing of the Basketball Hall of Fame.

Later, I figured out that Joe Tait being in the Hall of Fame wasn’t nearly as cool as Joe Tait just being my friend.

“Hey, that football team in Wyoming ever win a game?” Joe asked a few years back.

“Yeah, maybe even a couple since then,” I said.

Then Joe brought up the train station in Evanston again. I never did make it there. But I looked it up, and the trains there are still running. And now I intend to go.

There was a time when all I wanted to do in life was write about pro basketball. I still love it, couldn’t imagine doing anything else.

But there is clearly something else out there worth seeing. And I trust the man who was my eyes for so many Cavs games when he tells me to check it out.

Heat, Bulls in the mix for LaMarcus Aldridge

Heat, Bulls in the mix for LaMarcus Aldridge