MIL-BOS: 2 Betting Props to Consider ahead of Game 5

MIL-BOS: 2 Betting Props to Consider ahead of Game 5

The Bucks and Celtics now play the best of three to see who advances to the Eastern Conference finals.

Boston is a 5.5-point favorite at home in Game 5 (PointsBet) and while we await tip-off, let’s take a look at some betting props to consider:

Giannis has gone over this total in three of four contests during this series with his only under coming in Game 4 where he had just five on a series-high 15 potential assists. There’s some risk of this becoming even more of a defensive battle than previous games, as teams typically clamp up each other more as a long, competitive series progresses. Still, this prop is one to consider.

It’s a low bar to hit and Brook Lopez has only hit it once in this series (Game 3 in Milwaukee where he had two assists). He’s thrown 58 passes in the series and totaled just two potential assists with Boston’s defense stifling the ranging center. Taking into account how poorly he’s played on the road vs. home, this is one where I’ll play the numbers. 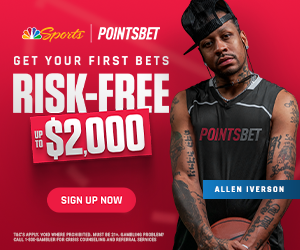 The PointsBet Bonus code MVPBET is truly awesome. Two risk-free bets up to $2,000 is one of the best promotions running, and it’s available to all new players right now.

Nets GM on Kyrie: ‘He Has Some Decisions To Make’

There's chatter around the league that the Pistons have eyes for Arizona's Bennedict Mathurin, Kevin O'Connor of the Ringer writes...

The Bucks hold the No. 24 overall pick in the 2022 NBA Draft and as Jonathan Givony of ESPN.com writes,...

The NBA Draft is near and through various reports, we have a clearer idea of who may land as the...

The Boston Celtics returned home for Game 3 of the NBA Finals and they were determined to protect the home...