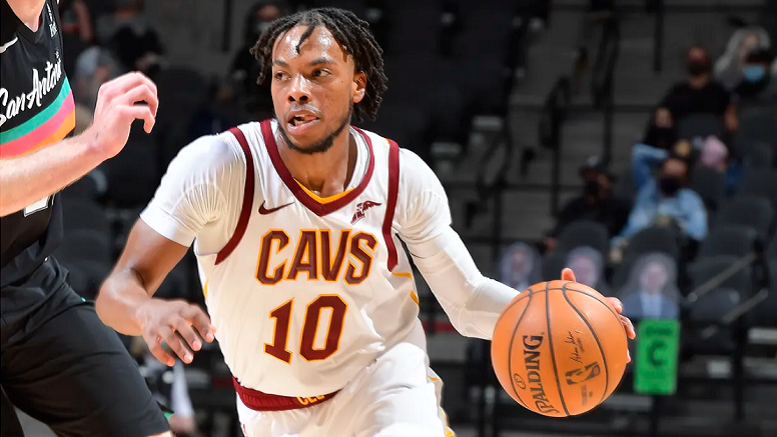 Random dribbles on the Cavaliers, who snapped a five-game skid with a 125-101 road thumping of the San Antonio Spurs on Monday.

1. You can like Darius Garland and still love Collin Sexton. And vice-versa. Most Cavs fans already know that. Both players offer promise in their own unique way.

2. So this isn’t about some personal need to pick one over the other — like you’re choosing up sides with your buddies at the local rec center. It’s not about either of the Cavs’ young guards having some serious basketball flaw. It’s not about any of that.

3. It’s just about starting to think what may be best for the team, for the player, for all involved, moving forward.

4. What’s the point here? Well, even after both Garland (career-high 37 points) and Sexton (22) were fantastic vs. the Spurs, there are questions about whether they are the fantastic fit together. And if not, which one the Cavs should keep.

5. Now, it’s much too soon to write off a Sexton-Garland pairing. You can’t definitively say it won’t work. But it is fair to ask if it will work as currently arranged.

6. While we go through this, let’s keep in mind that both players stand 6-foot-1. Sexton is 22 years old; Garland 21. Their birthdays are two days apart in January. Both are young enough to still be playing in the NCAA Tournament.

7. Let’s start with Garland. We are starting to see what can happen when the ball is in his hands. Week by week, he is showing more of a penchant for running the offense. He is getting more comfortable with the pro game.

8. As one source told FortyEightMinutes, Garland was “born” to be a point guard. It sure is starting to look that way.

9. As Cavs coach J.B. Bickerstaff told reporters, “We saw his potential in the draft and that’s why we selected him. … We want him to play with this belief and confidence every night, because that’s what point guards do.”

9. OK, now for Sexton. He was born to be a scorer. He can really fill it up, and he can do it in a multitude ways. If nothing else, he is going to get you at least 20 points every night. As is the case this season, he will hit about 48 percent of his shots while doing so.

10. Now, Sexton is one of those guys who “needs the ball to make an impact,” as those around the NBA like to say. But that’s OK. The name of the game is throwing the orange ball through the cylinder. Do it more than your opponent, and you win. Sexton can often do it with the best of them.

11. But Sexton is not a traditional shooting guard along the lines of a Ray Allen, Klay Thompson, Devin Booker or Bradley Beal. Sexton is more of a converted point guard who is the “scoring” guard by default.

12. If there’s a current NBA player that Sexton is comparable in effectiveness and role, it’s probably Lou Williams, recently of the Los Angeles Clippers and now of the Atlanta Hawks. Williams has long been an automatic bucket off the bench.

13. Frankly, that may be a role for which Sexton is most suited on a winning team.

14. Now, the Cavs aren’t going to move Sexton to the bench. It’s too late for that. They already have gone out of their way to try to make him the face of the franchise. You don’t tell that type of player, “Hey, you’re our sixth man now.” Sexton is above that in Cleveland now. It highly likely would not fly.

15. And at the moment, it would only serve as a setback for the Cavs. They need Sexton’s scoring in the starting lineup.

16. But know what they appear to need even more? The ball in Garland’s hands. And not just the ball in his hands, but for him to be the centerpiece of everything they do on offense.

17. Yes, that sounds like a lot for a player who is just in his second season and continuing to prove himself. Then again, when Garland is the primary man with the ball, proving himself is precisely what he’s beginning to do.

18. That is what happened on Monday, and the Cavs looked like a different team. They looked as promising as they have at any time this season. Garland just decided to control things, and the Cavs were considerably better for it.

19. The more the Cavs evaluate their backcourt, and the more Garland and Sexton play together, the more the future of the franchise comes into focus.

20. We’re not at the point of a final decision, not by any stretch. But it may be time to start thinking about Garland as the top option, Sexton as the No. 2 — and what Garland might look like as the point guard next to a traditional starting shooting guard, with Sexton erupting for buckets in reserve.

21. Again, that’s not definitive or a decision the Cavs have to reach this season. It is simply something to think about, perhaps something we are beginning to see unfolding in front of us. For both of the Cavs’ young guards, the future is looking brighter. It’s up to the Cavs to get the rest of it right from here.