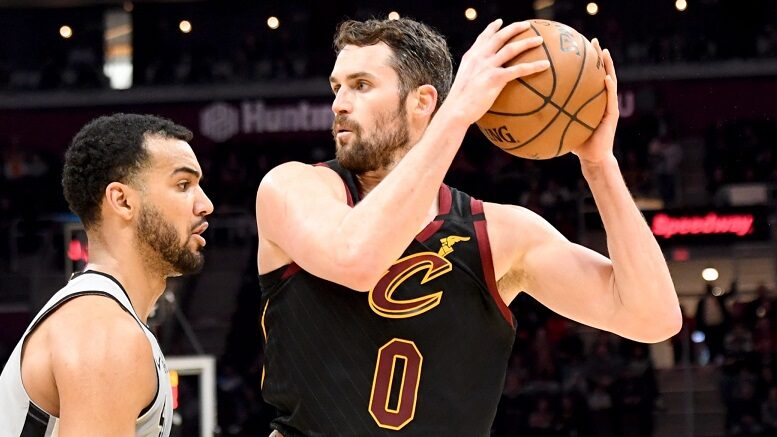 Cavaliers power forward Kevin Love looks to pass during a game vs. the Spurs.

Kevin Love trade rumors are just the way of the NBA, and here we are again.

Only this time, the Cavaliers should really think about it. They may even be thinking about it already.

The Cavs no longer need Love — regardless of the what the plan is for the upcoming season. It really has gotten to the point where Love and the Cavs would be better off apart.

That sounds harsh. I understand Cleveland’s love for Love. I understand Love is still a productive player. I also understand he again seemed content with the Cavs after the coaching change from John Beilein to J.B. Bickerstaff. Love isn’t demanding to go anywhere.

He will come back, put in the work and put up some numbers. He remains the only member of the Cavs who once made the All-Star team. He won a championship in 2016. He is the rare breed of power forward — as Love can bury 3-pointers and average double figures in rebounding. And the Cavs do need some older players, especially if they have dreams of the playoffs.

Who makes the playoffs? Teams with good veterans, that’s who.

Love has been with the Cavs since 2014. He’s been the subject of rumors at every trade deadline and for every draft since arriving. For most of his time in Cleveland, he’s been viewed as the most movable member of the team — a player who will help put a contender over the hump, a player who would presumably bring back the Cavs plenty in return.

I’m not so sure about the second part anymore. If the Cavs want someone pretty good for Love now, they may have to throw in their draft pick (fifth overall).

“I was talking to an executive the other day, just this week, and I said, ‘Yeah, I heard that Kevin Love was back on the trade market,’” Windhorst said on a Cleveland.com podcast. “And he laughed, and he goes, ‘Please tell me when he was off the trade market.'”

Now, keep in mind that opposing executives don’t always have the Cavs’ best interests in mind. So someone could conceivably float that Love is on the market just to mess with him (and the Cavs).

But I doubt that is what’s happening here. It’s more likely that Cavs general manager Koby Altman is keeping his options open with Love. And if Altman hasn’t outright told other GMs, he’s hinted at it.

That’s not any sort of inside information. Just a gut feeling.

One thing I do know is the Cavs want to put their foot on the gas toward becoming relevant again and fighting for a playoff spot. Again, veterans such as Love and Andre Drummond can help them get there faster. But the Cavs may be able to get a better veteran in a Love trade.

Love is a great teammate, gets along with everybody. But he’s not really much of a leader. By that, I mean he’s not going to take charge of the locker room and demand improvement from the younger players. He’s more apt to be just one of the guys.

He’s probably better in the background, a third or fourth option on a team with championship aspirations.

While Love is more skilled, Tristan Thompson is more valuable when it comes to what the Cavs need. Thompson is an unrestricted free agent. I have strong doubts about his return. If I’m the Cavs, I do whatever I can to bring back Thompson — and trade Love.

The presence and continued rise of Larry Nance Jr. would also make me feel fine with a Love trade.

It won’t be easy to trade Love, even if the Cavs really make a push. He has three years left on a contract that will pay him in the neighborhood of $118 million. He is 32 years old. While he stayed healthy last season (59 of a possible 65 games), he’s usually prone to injury. He can miss lots of time.

There are questions around the league as to whether Love will play through pain — and true or not, that impacts his trade value.

The Cavs could always keep Love. It definitely wouldn’t hurt anything. But seeing what’s out there for him wouldn’t, either.

That’s not an insult to Love. They almost traded him to Indiana a few years back, but the Pacers pulled out. It didn’t mean the Cavs thought Love was finished. It just meant they thought he could be used to a pathway to improvement.

That’s the goal of every team. Iif the Cavs think Love can be that person today, they should undoubtedly make him available, sell his strengths and go get something that gets the fans excited again. 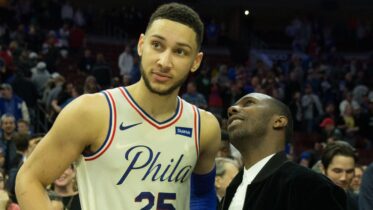 The Ben Simmons situation continues and while Philadelphia would like to patch things up, it appears a trade at some point in the future is likely to occur. Simmons reportedly is not…